I am speechless. I have gained so much help from the community, and people across the world.

I am glad to present that with the help of people from Ubuntu Budgie, Alan, and Simon Quigley’s (Lubuntu Lead) jokes, Ubuntu Cinnamon 19.10 Eoan Ermine is now released.

I cannot thank you anymore for this. Please go to the following links:

P.S. Please remember that ‘remix’ means that it is not officially recognized by Canonical or the Ubuntu Desktop Team. This is a potential flavor. Do not complain for not including this as a flavor, as we still have work to do. Thank you for your support.

Very nice!
Looked at it in a live session. Didn’t install, as I have moved everything to focal, even have Cinnamon.
But, checked yours. The wallpaper looks shiny, with more life! Beautiful colour too!
Few suggestions; 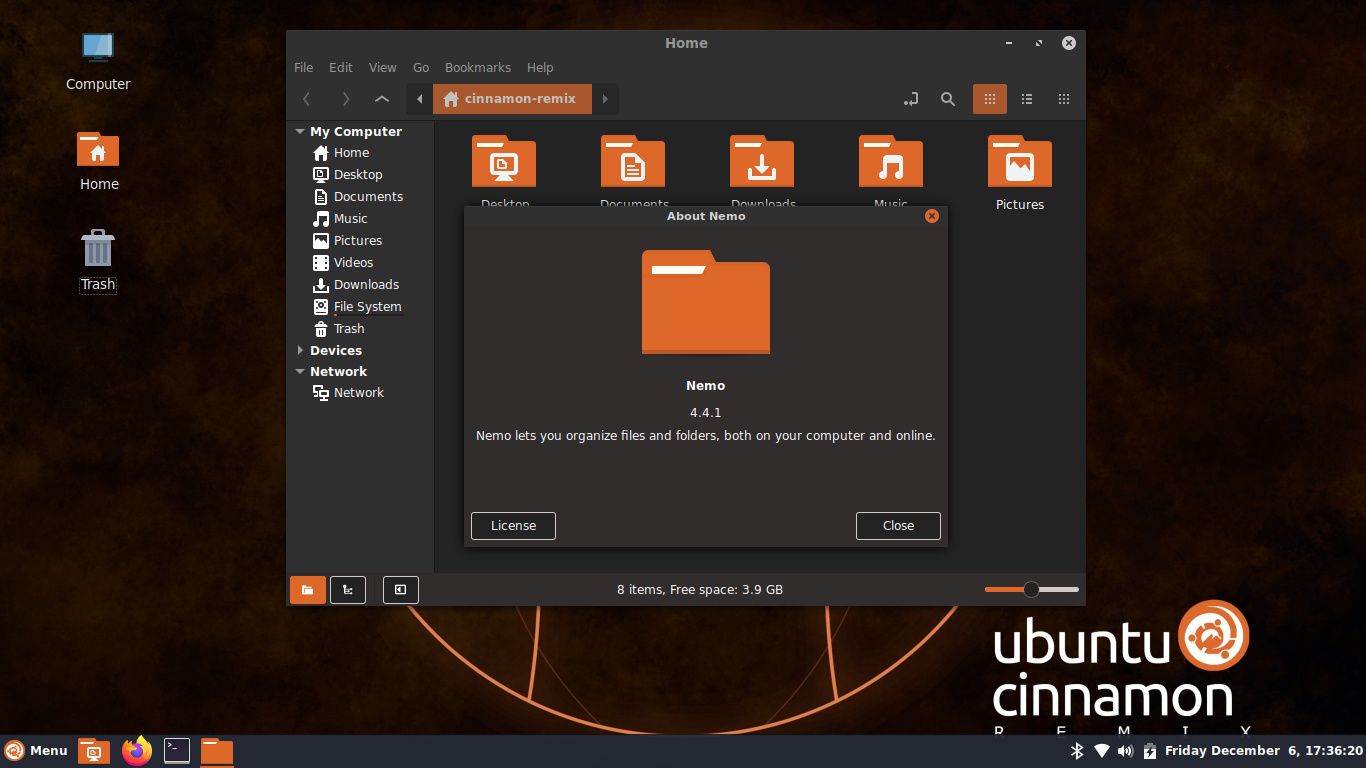 Writing from the live session.

Why would you go to all this trouble when all one has to do is add a ppa with the latest cinnamon : like https://launchpad.net/~embrosyn/+archive/ubuntu/cinnamon?field.series_filter=disco to their already installed vanilla Ubuntu?

…to their already installed vanilla Ubuntu?

What is vanilla Ubuntu?

Some thoughts and questions:

Hi! Thanks for testing!

Our panel when I tested on a MacBook was too big so I shrunk it to 20. Any lower would be insanely tiny for some larger screens.

An orange panel wouldn’t look as good considering our themes. Do you mean transparent?

They are both trade offs-gThumb has its own and so does GNOME Photos.

Yes, I realized we forgot screenshot. I will figure that out.

I will consider Synaptic but it isn’t likely it will be in.

This ain’t trouble and sometimes universe is ahead of those. And besides that person isn’t an Ubuntu member. Imagine a flavor with a user repository coming preinsyalled.

We are having server issues transferring things, so we are aware. No worries

If you want to know, go check the other repositories-look at our GitHub. It isn’t easy. Budgie-remix was harder because fossfreedom didn’t have a start so he had to program everything. It’s already here for us and he’s lending it to us. Of course there will be more but for now this will cover. Again this is a WIP flavor.

See the ubuntucinnamon-environment package? That differs from cinnamon-desktop-environment because it has settings overrides, making the default panel size, icons, themes, and wallpapers. Look at our source code

And I want to make this clear to EVERYBODY:

We are using older versions of cinnamon because it is more stable. LM makes Cinnamon and it needs to go to Debian and then they have to go to Ubuntu. We can’t use unofficial cinnamon repos because they are unstable due to bad building and copyright.

Don’t worry-Cinnamon 4.2 is in Debian repos and is in Focal repos. Every once in a while we will make test builds with latest cinnamon.

I upgraded my packages test to 4.2 and nothing really changed. Just be patient and if you want you can upgrade your copy of cinnamon-remix by using sudo do-release-upgrade -d.

The chances of getting the official status is minimal. Hope you don’t mind me saying that.

So, include those apps people like, such as Synaptic. Everyone out there, who uses deb packages, use Synaptic, even PCLinuxOS with rpm. So, best give users what they want. Let UbuntuCinnamon be a remix for the moment. Let people find out about it. Good that it is published in Sourceforge, for people go there. Most known distros are there.

Match the panel colour to the wallpaper.
About Nemo, I am using 4.4.1, and that’s all I need from Mint!

In a few days, I’ll download the next release and test it out. I like people taking chances to create something. Its nice to see some excitement!

I said nothing about any ‘flavour’, just questioning why you need to reinvent the wheel, when it’s already in the repo. Whatever floats yer boat! I’ve run from that repo and it’s stable, stable as Mint is, and I have no comment about that. I’d never use Mint, due to their past record.

What is vanilla Ubuntu?

Oh my, I guess with all your assimilated, hacked builds you’ve forgotten that there is an Ubuntu that just works, out of the box.

Oh my, I guess with all your assimilated, hacked builds you’ve forgotten that there is an Ubuntu that just works, out of the box.

There is no reason to be toxic. We actually welcome projects like this.

Why would you go to all this trouble when all one has to do is add a ppa with the latest cinnamon : like https://launchpad.net/~embrosyn/+archive/ubuntu/cinnamon?field.series_filter=disco to their already installed vanilla Ubuntu?

One requirement for prospective flavors is that everything must be done without using external repositories. So, PPAs are out of the question.

The chances of getting the official status is minimal.

Believe it or not, itzswirlz is actually getting a lot of guidance from flavor leads such as myself and others that have gone before him. Granted, I took over an existing flavor, but there are others who have been helping him through this process. It’s more possible than you think!

With that, I want everyone to question whether or not they’re abiding by the Ubuntu Code-Of-Conduct before posting here. Try to be encouraging. Don’t be a jerk.

It’s more possible than you think!

First of all, I am encouraging Joshua to continue. That’s why I test his build. I don’t know about your existing flavour, but It is very nice of you to help him out. I’ve been checking up on his work on for sometime, tested it as soon as he published it. I only came back here, only to talk about his distro, report whatever that can be of help. (I am looking at every “flavour” from the point of view of what I have in my system on focal – Cinnamon, Gnome, Openbox and Unity – all working run/with Nemo 4.4.1. )

Why I said that there’s minimal chance of getting the flavour status? Linux Mint is around for so long, I don’t think the mother company would go on to create another flavour, or any flavour at all in the future. I simply don’t want Joshua to lose heart in the process.

Why I said that there’s minimal chance of getting the flavour status? Linux Mint is around for so long, I don’t this the mother company would go on to create another flavour, or any flavour at all in the future. I simply don’t want Joshua to lose heart in the process.

I understand, but when you say “The chances of getting the official status is minimal”, if I were Joshua, I’d feel discouraged.

Also, as far as Linux Mint being a factor, it’s not. If it were, then Ubuntu MATE never would have happened for the exact same reason. Linux Mint has been publishing a MATE flavor for the vast majority of the time of the project, and people questioned why have Ubuntu MATE when Linux Mint MATE is a thing.

As for what flavor I lead? I lead Ubuntu Studio, and created the default wallpaper in Ubuntu Cinnamon.

we are getting off topic and controversy here.

Yeah, we don’t know. But it requires work to be an official flavor-think of it all.

Remember, official flavors are not separate distributions from Ubuntu…

I know all about them. Being with Ubuntu since 4.10.
Mate is a different matter. Mate was created by an Arch user perberos, whereas Cinnamon is Clem’s baby. I watched that growing too, actively. Its good to have a UbuntuCinnamon Remix. Don’t worry, Joshua won’t be unhappy on whatever I say.

As for what flavor I lead? I lead Ubuntu Studio, and created the default wallpaper in Ubuntu Cinnamon.

I said it is nice, the wallpaper. After a long time, I looked at Ubuntu Studio few minutes ago. I see the similarity. I am going to have a look at U-Studio in a few minutes in live mode. If you want, I can give my thoughts on it, but open a new thread about it for that.

Add some screenshots and some description to the your Sourceforge page., maybe even a video.
There’s lot of downloads. Congrats!

Congratulations on the release. I know it was a lot of work to get here. It looks very promising. I’ve wanted a Cinnamon version of Ubuntu for quite a while. Mint is great but being based on the LTS is a disadvantage for me as the newer releases of Ubuntu work better on my hardware. I had used the embrosyn ppa in the past but it hasn’t been updated in a while and there is no version for Eoan.

I see you have both Sourceforge and GitHub pages. Where do you prefer to have users log feedback?

GitHub preferably. Sourceforge is okay too.