I will use this thead to collect some information about which features from upstream might hit Disco and which new features currently hit the repos.

Everybody is welcome to discuss of course

One package that hit the release repo recently is libarchive 3.3.3. That is a good thing since Debian and Ubuntu already skipped the versions 3.3.1 and 3.3.2 and i wasn’t too sure if it would be merged in time.

The new big new feature for libarchive will be zstandard support, the new Facebook compressor that is getting more and more widespread. Keep in mind that Nautilus and FIle Roller use libarchive for compression and decompression tasks.

Nov, 2016: libarchive is now being tested by the OSS-Fuzz project

Next in the libarchive pipeline is RAR 5 decoding support. But probably not in time for Disco…

If the idea of this thread is what’s missing, then there are two missing actions, I noticed;

Suspend is not the same as when you open the lid, the laptop is on, without asking for the password.

Not every laptop has a absolutely new battery, so standard 10% is not enough. Most laptops have the ability of shutting down, if the battery goes down to certain level of the physical battery it has. There is, of course, a workaround, but not every user (most standard user) knows it, or knows how to get it done. Mine is a 5 year old laptop and I’ve put the low level to to 18% using the workaround found in the Arch Wiki, so I can plug in the power and keep on working.

I hope that the fixed GIF decoding will come to GNOME. The patch is currently under review.: https://gitlab.gnome.org/GNOME/gdk-pixbuf/merge_requests/28

There is a nice blog post about the features that will come up with Libreoffice 6.2: https://blog.documentfoundation.org/blog/2019/01/11/libreoffice-6-2-community-focus-design/

New Elementary icons and the really modern looking project Muffin (=Notebookbar) will be ready for Disco.

Firefox 66
This will not be Disco only, but will come to Cosmic and the LTS as well:
The CSD with the tabs within the titlebar will be turned on by default in Firefox 66. It is the default on WIndows and MacOS already and Linux will now follow suit: https://bugzilla.mozilla.org/show_bug.cgi?id=1490344

Wayland will be easier to test soon as you just need to set an env to enable it.

not having an app to adjust the notification of the percentage of the battery critical lowest level of the laptop.

Please open a Tweaks bug for that.

Reminder: Let’s keep general complaints, bugs, and wishlist items out of this discussion…unless, of course, fixes for them are likely to land in Disco.

I will use this thead to collect some information about which features from upstream might hit Disco and which new features currently hit the repos.

This will be an interesting one for Disco: Ubuntu always deviated from upstream by patching out the PCR2 support for regular expressions. The reason for that was that PCRE2 was not shipped in main.

That changed now and Ubuntu could finally drop that delta. Gnome-terminal now supports regular expressions as it is supposed to.

Gnome-terminal 3.31.xx is not yet in Ubuntu but will finally sport real headerbars with client side decorations and a hamburger menu. It will not NOT move the tab-bar to the header though (at least for now).

With all those layout changes, chances are that @3v1n0 will have to adapt his scrollbar patch for Unity/Ambiance. Let’s hope that he can make his patch conditional to Ambiance only so that it doesn’t push the scrollbar out of bounds for GNOME/Yaru anymore.

Olivier Tilloy recently opened a Trello card for LibreOffice 6.2. So this is going to be packaged up for Ubuntu soon: https://trello.com/c/VCJXTSpR

And the first packages of GNOME 3.32 hit the Disco repos (in its beta 3.31.90 incarnation) : gedit, gedit-plugins, simple-scan (should probably be renamed to GNOME-scan in the future?) and some of the games that ship with GNOME: Quadrapassel, Tetravex, Mahjong and Tali.

Other more complex packages will follow suit. With GNOME-Shell and Mutter being notoriously a bit late being tagged for the (pre) release. And thus often being late in being packaged.

Simple-Scan
That’s the simple-scan changelog for this cycle so far (besides translations):

gedit
Those are the changes for this cycle so far (beside translations):

GNOME-Shell
The scariest proposal for GNOME 3.32 was the goal to drop the app-menu (the one to the right side of “Activities”) entirely:
https://gitlab.gnome.org/GNOME/gnome-shell/issues/624#note_428862

Now the decision was made and Allan Day clarified: Just the apps lose their possibility to render content to the menu. The menu itself will stay (including the app name the app icon) and the menu will offer the same options that context menu in the app grid offers.

I think that this is a sensible choice because I see that most apps didn’t make use of the app-menu at all and people didn’t search for additional app-functionality there. The chosen solution still lets us see which app has focus.

This solution made its way to the master branch now and will hit the Ubuntu repos in some days (or weeks).

The most visible change in gnome-shell and gdm will be that they are going for probably a bit bigger, round and borderless avatar pictures. In the top bar menu (where you can choose to quit GNOME, disconnect WiFi) the log off avatar will be replaced by a symbolic icon. A good choice IMHO.

Everything still in git master, nothing in Ubuntu yet.

Gparted was ported to gtk3. So another blocker is out of the way for Wayland.

But I don’t know, when the next release is planned to happen. So I am not sure if that will be ready for Disco.

Gnome-Terminal
I haven not yet migrated over to DIsco, but found that Screenshot in a Yaru Bug: 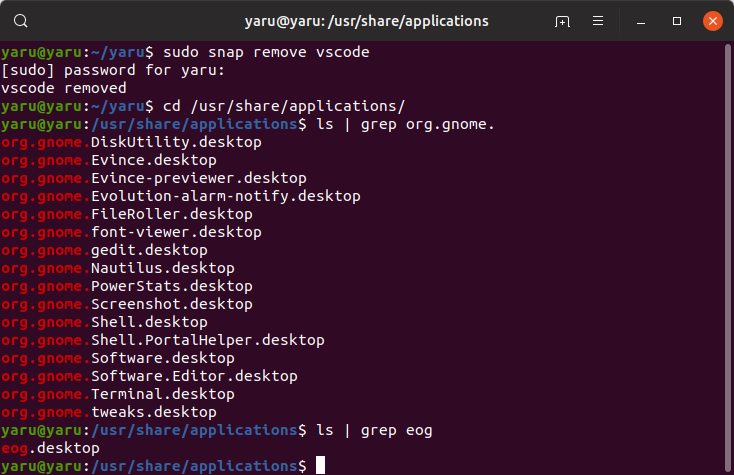 I don’t see the scrollbar glitch. @frederik-f, did you just cut the glitch off on your screenshot or is it finally gone for good?

The scrollbar being pushed out of bounds by one or two pixels due to a Unity/Ambiance theming patch by Marco Trevino.

Just to be seen on a bright background. But ever there since the Unity/GNOME switchover.

If you cannot see it in Disco that’s actually a good thing.

I didn’t experience that bug in a while. Was it on wayland only, maybe?

@c-lobrano: Yes, you are right, that is a bug on wayland only. I am on Wayland since Artful and had to boot the X.org session to be certain

Under wayland the terminal looks like this: [UPDATE: Problem SOLVED in 19.04, 18.10 Screanshot remove]

@3v1n0 once said that he would have to adapt his Ambience scrollbar patch to be Unity-only but since @jbicha made this update instead the chances were low that this would be fixed by now.

With Wayland again not being the default in Disco I see now why this is treated low priority. I simply have forgotten that this is Wayland-specific.

)
5- cant change the size of the Menu like here 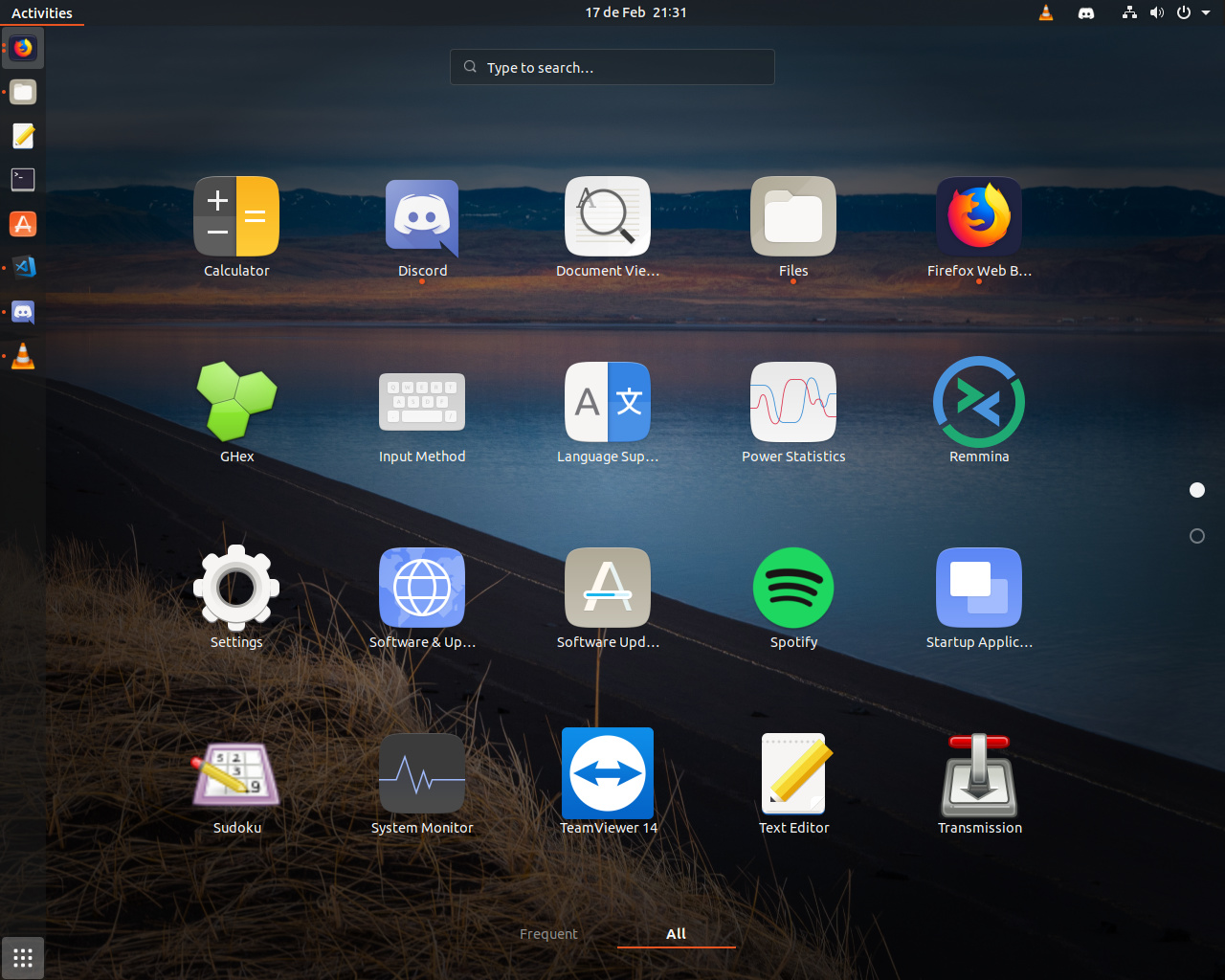 Remember that gnome-shell and Mutter are not yet on GNOME 3.31.

There are supposed to be some warts, when those components are updated.

I guess that they are currently testing those and will release them as 3.31.91 tomorrow (no guarantees though).

At least Robert Ancell’s GIF fixes were accepted today. For a better out of the box GIF compatibility.

Mutter and Gnome-shell 3.31.90 (=Beta 1) are currently hitting the repos. I am curious if those are rather stable already or crashy.

The Ubuntu dock had to be updated as well because there was a lot of under the hood reshuffling of code in the shell and in mutter. To gain some performance and to separate more and more codepaths between Wayland and X.