Flutter is an open-source UI software development kit created by Google. It is used to develop cross-platform applications. With Flutter, you can build natively compiled applications for mobile, web, desktop, and embedded devices from a single codebase.

But Flutter and other UI toolkits are not enough for embedding graphic applications into edge devices. For this, you need tools that provide orchestration services between functionalities, such as input modalities, display mode, windows behaviours, interfacing with GPU and more. This is where Ubuntu Frame comes in to ease the deployment of any graphic application.

In this tutorial, you will learn how to generate, build and snap a Flutter application on Ubuntu Core by leveraging Ubuntu Frame.

To be able to create and build Flutter applications, you would need to have Flutter and its tools installed. There are different ways to install Flutter on your Ubuntu Classic, but the recommended way is using the snap.

In addition to this, the snapcraft tool must be installed so that you can create snap out of your Flutter application. You can use the following command to install snapcraft on Ubuntu Classic system.

Now, we are ready to create our Flutter application.

Flutter does not enable desktop support by default. You have to explicitly configure your Flutter CLI tool. The rest is creating the project and running it. Easy peasy !

Once you run the above commands, you have to see the following screen on your Ubuntu Classic.

Perfect. Now our Flutter application is working fine on Ubuntu Classic. As a next step, we will create snap to be able to run it on Ubuntu Core.

Creating a snap package from your existing applications is quite easy task thanks to the snapcraft CLI tool.

Now, it needs a little bit of attention. Here is the initial version of the snapcraft.yaml file of our application. Let’s call our application “super-cool-app”.

Your snapcraft.yaml is ready to be built. It is suggested to use lxd while building snaps so that your machine will not be polluted.

If everything goes well, you will have your snap package in your directory. You can install it by using the following command. We have to use dangerous flag since we did not deploy our application to the Snap Store.

Now, you should be able to see it working on the Desktop. That’s great. You converted your application into the snap package format and made it possible to run on your Desktop

We’re not done just yet. We have to adjust our snapcraft.yaml file more to make it run on Ubuntu Core by leveraging ubuntu-frame.

There are three points that we need to take care of in order to run the Flutter applications on Ubuntu Core.

Here is the snapcraft.yaml where all the mentioned issues are addressed.

Re-create your snap after these modifications, and it will be ready for testing on Ubuntu Core.

You can use qemu and pre-built Ubuntu Core18 or Ubuntu Core20 images that are available to test the generated snap.

Assuming you already have an Ubuntu Core system up and running, just install ubuntu-frame using

Then, transfer your snap via scp. Finally install it by using;

After a couple of seconds, your application will appear on your screen!

If you are looking for more advanced Flutter Applications, you can find the reference snapcraft.yaml file for the Flutter Gallery Demo app that is provided by Flutter community to show case most of the features that Flutter offers.

And if you have a kiosk or digital signage product and need help deploying an Flutter app, talk to us!

after following the above steps, I got this.

That isn’t in the instructions and won’t work: There’s no Wayland server in your user session.

This is your problem: there’s an error in your snap packaging that prevents libGLESv1_CM.so.1 being found. Please recheck your snap recipe.

I’m testing on nvidia, does this matters ?

I’m testing on nvidia, does this matters ?

At what point in the tutorial are you? “Running Your Flutter Application Snap on Ubuntu Core”?

What device (or VM) are you running on?

after removing pulseaudio from snapcraft.yaml

This probably won’t work, but I’d like to verify that it doesn’t to eliminate possible causes, could you try running this: 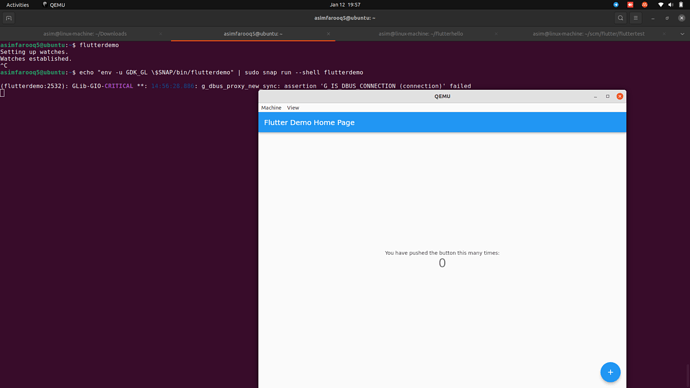 Cool. In that case, you simply need to remove the GDK_GL: gles lines from your snapcraft recipe and repackage. These lines are there because they are needed on some devices (e.g. RPi4). Unfortunately, it seems that they break things on QEMU.

We’ll need to do some more investigation into how to get this example working across all devices.

yeah, It working fine, I’ll repackage this for arm64 and test on RPi3&4.

We’ll need to do some more investigation into how to get this example working across all devices.

OK, the root cause is that the gnome-3-28-1804 snap is intended for desktop use and, since for amd64, there’s no need for GLES it doesn’t contain libgles1.

There’s another approach to building Flutter snaps for Core that does work across devices. The general approach is described here:

With a Flutter specific branch here:

I have build the snap with same config removing the GDK_GL: gles lines and got this in snap logs:

I’d expect to see that on RPi4.

In any case, I’ve just updated the snapcraft.yaml in the tutorial. That should work everywhere.

I tested with RPi3, let me test the updated config.

i’d do that type of detection at runtime instead of build time:

new snapcraft.yaml in the tutorial works fine for both amd64/arm64.

i’d do that type of detection at runtime instead of build time:

There are many equivalent ways to do this.