Since Ubuntu 18.04 LTS, the desktop “Welcome to Ubuntu” tool has shown a selection of recommended applications to users who have recently installed the OS on their system. Here’s what it looks like today:

There’s two pages at the end of the first-run, here’s page two.

The user doesn’t get these applications installed by default. These are simply a set of recommendations. Clicking an icon doesn’t directly install the application, but takes the user to the graphical storefront so they can read the description, license, reviews etc, and then decide whether to install or not.

The list is set inside the Snap Store as a hidden category called “ubuntu-firstrun” and is not release specific. So a user installing Ubuntu 18.04 will see the same as someone testing Ubuntu Hirsute (21.04).

You’ll notice there’s a real developer-focus on the selection. We have popular Integrated Development Environments (IDEs), code editors, a selection of browsers and some productivity applications. There’s a couple of games thrown in for good measure.

The applications have a variety of licenses. Some are proprietary, others are freely licensed.

Every so often we revisit the list, considering which applications should be shown. Typically we just review and make minor tweaks to the list, adding new, popular and interesting applications, and removing old or no-longer useful ones.

For the avoidance of doubt, nobody has paid to be in the selection, nor has there been any coercion to add or remove something from the list :). It’s just a selection of the thousands of available applications that we, as maintainers of the Ubuntu desktop, think would be useful.

We don’t have hard guidelines on what goes in the list, and what doesn’t. The applications should work well and be well-maintained, have an attractive and accurate store page, and be something many Ubuntu users would like installed.

So in the spirit of openness, I thought I’d write this up, and let you know my thoughts for the coming release. You’ll also notice there’s currently a gap on the second screen. So I’m looking for something to either put there, or slot in elsewhere which nudges all the icons “down” by one.

I think on the whole the current list is good. However that’s just my perspective. I’m keen to hear from the wider community on it.

I’m currently thinking about replacing Bomb Squad (proprietary, unofficial) with Cecconoid (creative commons, official package). I’m also pondering replacing Chromium with Brave, which is officially maintained by the upstream developers now. I have also just learned there’s a major update to Warzone2100 just landed, which might be a good one to switch with Xonotic.

Any other thoughts or suggestions would be most welcome.

I don’t know if it’s technically trivial or not, but i wonder if an option would be helpful that presents different suggestions to people based on a selectable user profile , e.g. developer, multimedia, FLOSS only, etc? 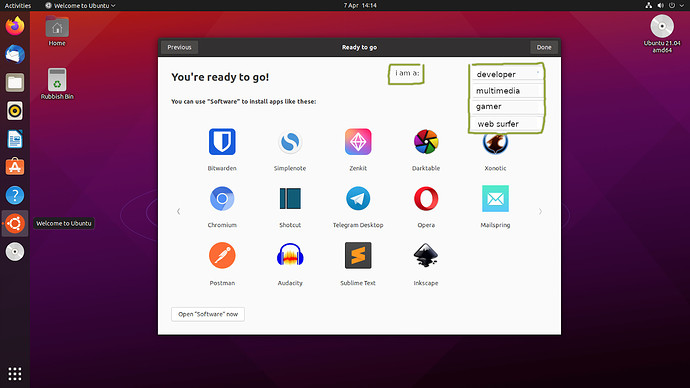 I think it is a great and important screen, first thing comes to users mind is that, “Yes, linux also has a store for apps!” especially new users, and to fill that gap, I think Foliate could be a nominee, its simple, easy to use with great feel and look for reading E-Books.

A good idea might be to show the user some of the pre-installed highlights, like Firefox and LibreOffice, while also showing some of the Recommended Highlighted Apps, like Telegram, Skype, VLC, Mailspring, Audacity and some others. In my opinion, the most downloaded Snaps should be the ones presented to the user, and as @sbutcher has said above, an option asking what kind of user you are is also a good point! By pressing the option that fits the user, it will show a list of recommended apps for that use case.

What if my user profile is developer, multimedia and gamer? There will be too much clicking and cycling through different windows with many icons. Two pages with icons widely separated from each other is enough. More will make the page unreadable.

Existing apps are good but in my opinion Brave and Stellarium should also be on the list. I’m not sure if Chromium should be removed. Well, unless it gets replaced by System Syzygy, then I’m all for it.

(shameless promotion for a snap I co-maintain) If you’re looking to add more games to the list, 0 A.D. might be a good candidate. The publisher is verified and is the upstream project, and its store page is pretty complete. As a potential downside it is quite a large snap and might not run smoothly on all systems.

I don’t know if it’s technically trivial or not, but i wonder if an option would be helpful that presents different suggestions to people based on a selectable user profile , e.g. developer, multimedia, FLOSS only, etc?

We have considered and discussed this in the past, but I don’t think we had a good design for it. Plus as others have mentioned, there’s the problem that some people surf the web, develop and play on one machine. Perhaps in that mockup you made, the categories could be checkboxes, so the user can add as many categories as they like.

Eventually msteams and Zoom could be placed somewhere.
It is good that you place IDEs in front because many devs chose Ubuntu
But msteams and zoom got quiet popular since corona

Other than that @sbutcher 's selection idea is nice

I’ve seen a bunch of suggestions to add Zoom and Teams in. This seems like a sensible idea, given how popular they are among workers in these times. I suspect replacing Skype with Zoom and replace Zenkit with Teams.

We have both IDEA and PyCharm, and could perhaps replace one with something from GNOME or KDE? I think we should have at least one IntelliJ application though, as they’re very popular, even if we don’t show them all.

From my personal perspective, I would advocate for apps that appeal to us graphic artists and gamers: GIMP, Krita, Flowblade, Steam.

I just wish the Ubuntu/GNOME Software store could also house paid apps, like Renoise, Reaper, … There are some good DAWs out there nowadays that could pull in musical artists.

That’s already possible. Just for f in $(snap list | awk '{print $1}' | grep -v "^Name"); do echo snap remove --purge $f; done && apt remove snapd (the echo is intentional to stop someone accidentally removing them all) to remove all snaps then snapd. Frankly, we’re unlikely to make it much easier than that to remove a core bit of the platform we’ve worked on for years and baked into the distro. You’re perfectly at liberty to do that though.

I just wish the Ubuntu/GNOME Software store could also house paid apps, like Renoise, Reaper, … There are some good DAWs out there nowadays that could pull in musical artists.

I so wish we could ship paid apps too. Unfortunately that feature isn’t quite ready, and I’m not sure when it will be, sadly.

This is because Steam is extremely popular in the gaming community, and has been widely adopted by Linux gamers. Most gamers coming from Windows will appreciate the fact that Steam has a native Linux client in the official Ubuntu repo (and will probably be thrilled to discover that the Steam client for Linux has a built-in feature which will allow them to run their beloved Windows-exclusive games on Linux, albeit not perfect).

I also want to say that the mention of Ubuntu 18.04 LTS at the beginning of this post brings back memories of me switching to Linux for the first time about 2 years ago (since Ubuntu 18.04.2 LTS was the first Ubuntu release, and the first Linux distro for that matter, that I ever used as a daily driver). I feel that the “Welcome to Ubuntu” tool is an effective way of introducing a new Ubuntu user to the applications offered on Ubuntu Software, and how applications are installed on Linux (speaking from experience).

Funny, I would prefer an option to hide debs

The problem here is all the applications I’ve shown are snaps. We don’t have a snap of Steam, and we have tried, but it’s a bit problematic, and a long story. We (currently) have no way (that I know of) to show debs. I agree it would be good to show Steam in the list, but right now (as far as I am aware) that’s just not possible.

The problem here is all the applications I’ve shown are snaps. We don’t have a snap of Steam, and we have tried, but it’s a bit problematic, and a long story. We (currently) have no way (that I know of) to show debs. I agree it would be good to show Steam in the list, but right now (as far as I am aware) that’s just not possible.

Thanks for all the feedback everyone. I’ve tweaked the list for the upcoming release (which will also be used by people installing older releases, and point releases of older releases).

I see krita twice in that list. Is it that good?