A few days ago, several things happened around the issue of Unity’s development. To add to these actions that have been happening, here is some news: 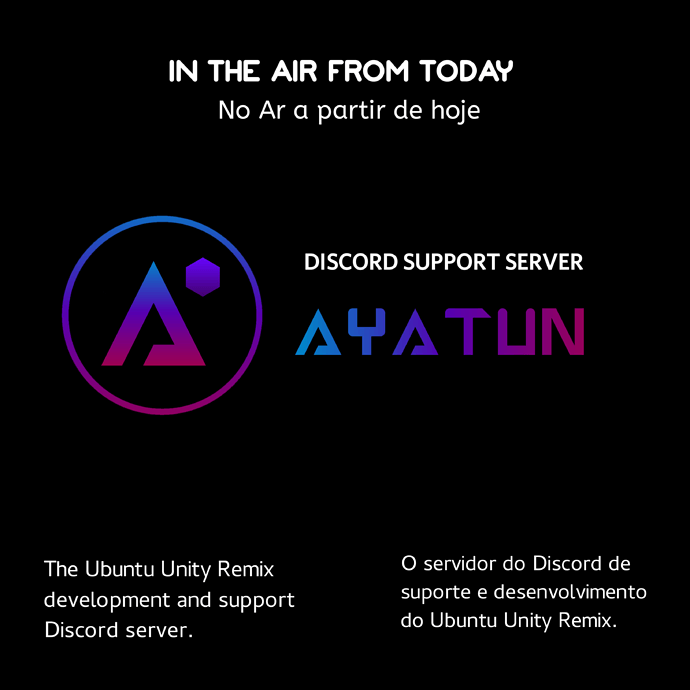 In the face of requests and suggestions I received, and based on the Reorganization Plan, we now have a Discord server geared to house all development and support for members, making it the fastest way of access for users using Unity , either in the current version, as well as in the previous versions (LTS) of Ubuntu itself.

As part of an effort to serve those involved in the project, Ayatun is being launched as a bilingual server, encompassing English and Portuguese and aiming to serve users in their native language. However, it should be noted that the server may be expanded to other languages, if other communities in other countries are interested in following and participating in the project.

The access link to join it is this one. 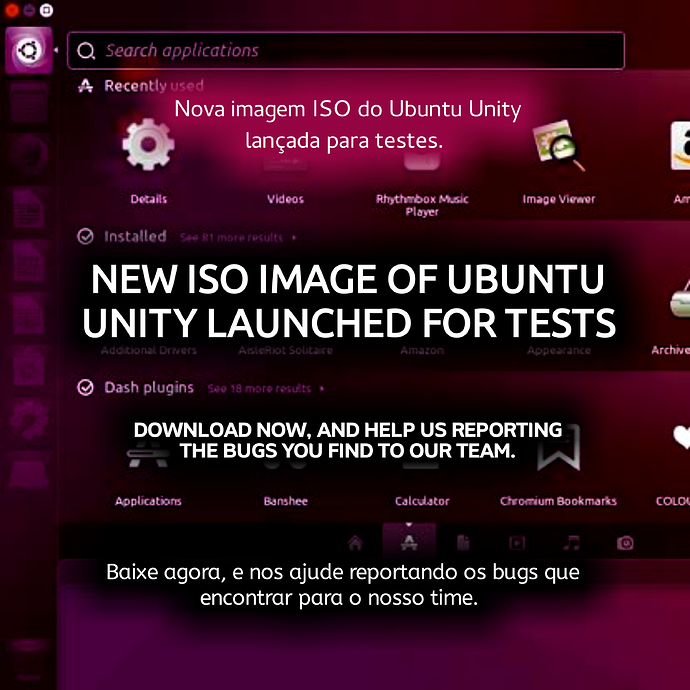 After a while, we now have the new ISO of Ubuntu Unity Remix among us, so that interested developers and users who like a good adventure, can test and check for bugs or something that needs to be improved and fixed.

The download link is within that topic below, which was updated yesterday:

I would like to take advantage of and thank each of the members involved in this project. Right now, we are in a few people, but we will do our best to make sure everything goes smoothly.

Do you have anyone to look after/maintain Unity with you, or are you depending on @khurshid-alam’s ppa?

Creating a live iso with Unity is not that big a deal, without someone to look after the certain details of Unity DE.

That message was for me or the @rauldipeas?

@JerareYoshi and guys, I updated the server again to make it simpler and more objective. If you want to check it out later, feel free.

A few days ago, several things happened around the issue of Unity’s development.

I recommend that you clarify this doubt with @rauldipeas, , because I will still test the ISO image he created today.

The development of this project goes further than creating, testing and reporting ISO image bugs. I am a normal user, who is creating the arts, logos, wallpapers and everything related to that to give identity to the remix / flavor. I’m doing it all because I believe in this project, and even though I don’t know a lot of things right now, I’m doing what I can.

I recommend that you clarify this doubt with @rauldipeas,

That, I don’t need an answer.

I am a normal user, who is creating the arts, logos, wallpapers and everything related to that to give identity to the remix / flavor.

As i’m sayed in another topic, this ISO is vanilla Ubuntu Unity Desktop, first pre release and i need some feedback to improve.

I think the goal here is to provide a hub to project evolve.

Redundant is not a insult…

As i’m sayed in another topic…

Which topic, by the way?

Read the topics in this category how the vanilla Ubuntu Unity Desktop came to be, especially from the beginning.

Reading topics from the beginning doesn’t make you an expertise on this subject.

Maybe not, but you’d know how the vanilla Ubuntu Unity Desktop came to be, if you read it from the beginning. Once, that package is there, it is quite easy for anyone to install ubuntu-unity-desktop in any Ubuntu installation. There’s a person, who volunteered to create and maintain it and without him, it wouldn’t have come this far. That’s why this Ubuntu Discourse is more important than any other out there. Here, the developers help each other.

Hi, I think unity is one of the best desktops on Linux today, which is why I would have some questions to understand the future of unity:

Honestly, I have been looking for unity-next for a long time, that is unity8 and now Lomiri ready on desktop, I consider it the best project on the desktop, Canonical has done a great job, to date there is no desktop really converge for various devices.

@rauldipeas and @khurshid-alam, I’m mentioning you here because I don’t know how to answer about. What plans do you two have in mind about this?

My plan it’s to get some feedback from here and include all in ISO that i provide.

I’m actually reading all topics related to get start.

I haven’t tried the iso yet but, It is good start. But ubuntu-unity-desktop metapackage hasn’t been updated for while. I will update soon. And then it will satisfy all the dependency.