Getting global menu back

I also wonder how Mate is going to adapt: the titlebar-less maximized windows are among its official supported features.

Not one in Mate is develop Gtk, so in theory they can no do anything, but in practice the support for that feature can be reintroduced as a distro specific patch to Gtk (probably for all distributions that want to fully support the Mate desktop). This is of course complex and is not fully on the hands of the Mate developers. Also i’m not saying here that the Mate team will used that idea. What i said it’s just that, an idea. Also I said that only because it’s how this was resolved before in similar situations.

If all people would realized that there is a world out there somewhat farther from where they reach their sight, we probably had a better ecosystem in Linux.

Are you saying that at a Gtk developer?
IMHO it’s quite normal to give GNOME users advice how they can configure their environment. And it’s just fine if the said advice wouldn’t hold in different environments.

The toolkit’s role in that is to support the necessary capability, at least in the environments where that’s possible.

Any conflict that I can think of may arise when some developers write their programs in a way that would only work in e.g. GNOME.

Are you saying that at a Gtk developer?

No, I’m saying this as general concept. People tends to omit the preference and the work of others… I think it’s not good that this happens and this is without enter in details of if was an specific user or a developer. But yes this is an specific example, and you can find specific affected people here. I guess the ideal world, where all try to help all does only exist in my imagination, but not in practice.

GtkWindow::hide-titlebar-when-maximized is a small patch and easily maintainable. Open a new thread to discuss pos & cons. But I would also first try to reach Debian if they can carry the patch (for x11)

Atm no one using gtk4, but soon some gnome apps will use it. So it is worth discussing.

@khurshid-alam There are an idea to fix this using the Gtk styles. Also, the creation of a patch for the non existing Gtk4 applications see to be a little premature and a little difficult to defend then. I think that need to wait for the release of Gtk4 at less, but it’s my opinion.

An alternative to the global menu can be to get rid of the top panel.

Here’s an article about an extension that apparently allows that and moves the notification area to the dock: https://www.omgubuntu.co.uk/2019/09/dash-to-panel-vertical-wip

If you’re saying that GNOME developers tend to ignore at times “the preference and the work of others”, and Gtk developers apparently do the same sometimes, I can see that.

And I agree with the general sentiment, of course.

If I remember right, D2P had been there since gnome 3.18…and, getting better all the time.

Yes and that vertical positioning is shaping up nicely. Maybe consider swapping D2D with D2P? Could give Ubuntu more of an own identity without deviating from upstream too much. 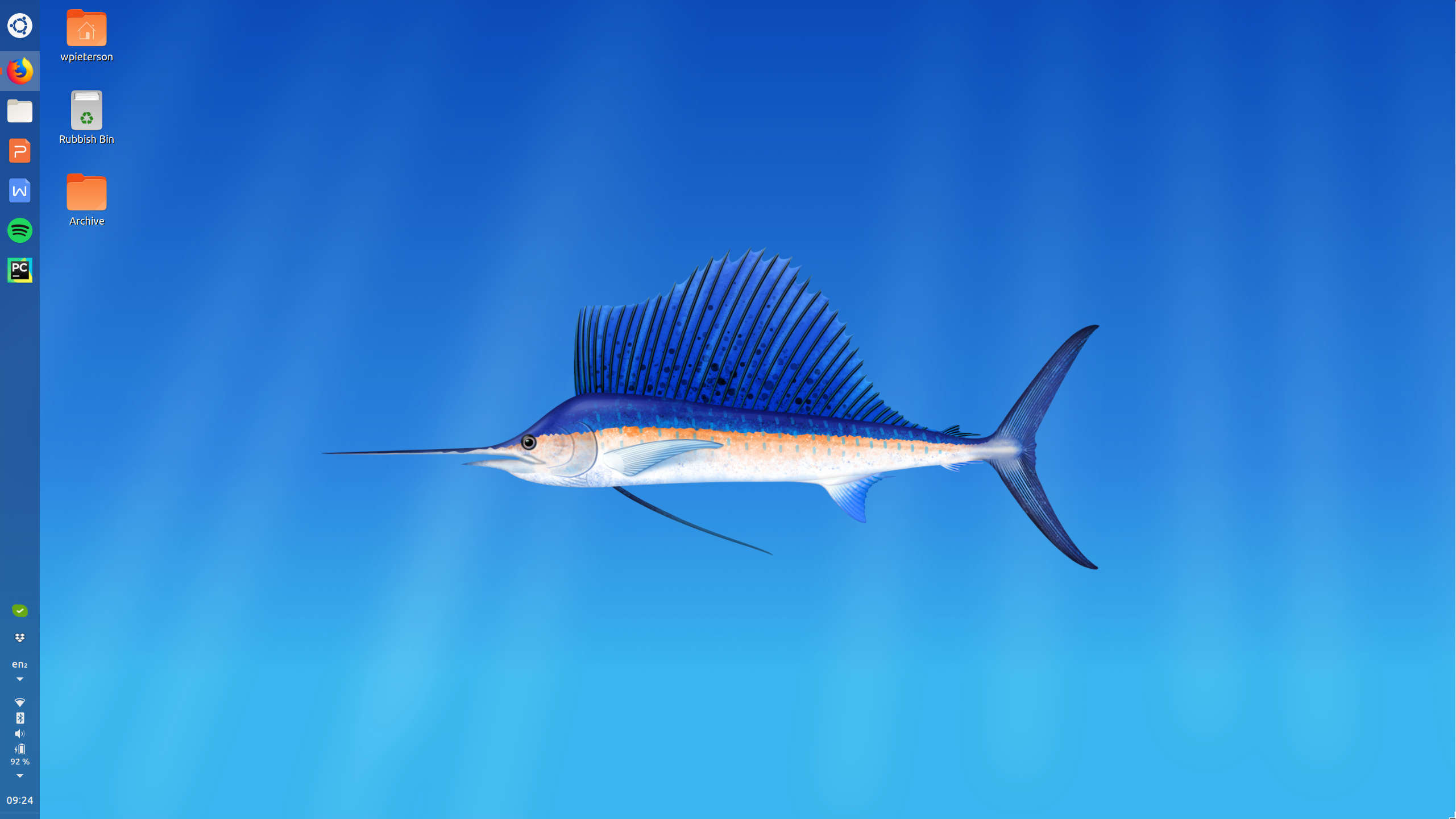 Nice! How did you get that vertical D2P panel?

There’s a few issues, but it works fairly well so far.

You’ve changed the app-grid icon to Ubuntu, so it look more like Unity. And, clicking on that Ubuntu icon opens the menu (or App grid). Nice!

I think, I’ll change that icon myself later, whether I’d use the panel on the bottom or on the left. Now, of course, the global menu is not needed, for there’s no top panel. It is on the left. 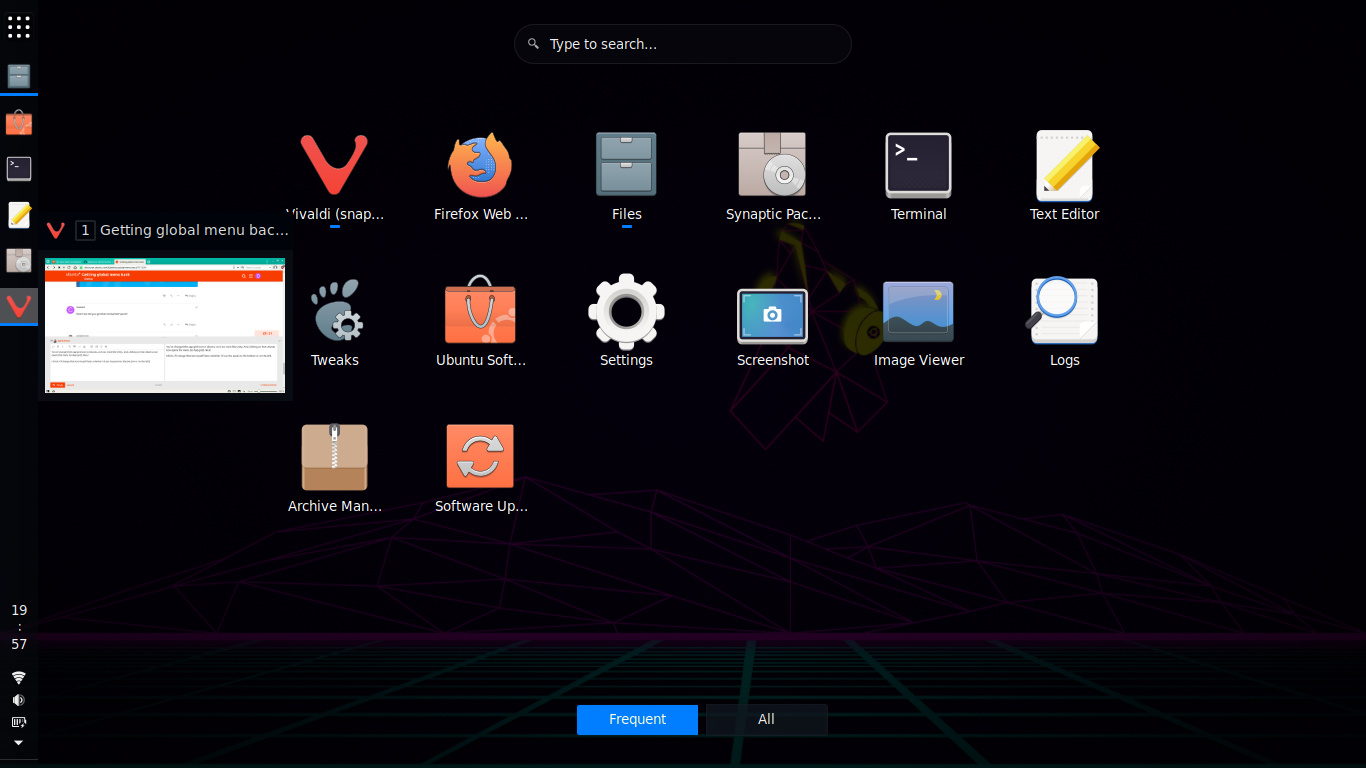 Thank you for the link.

You are welcome. Let me know if you need an svg of the BFB that I used.

I tried this for the moment,

Actually, all this trying to mimic the Unity look goes away with the vertical Dash to Panel. Up to now, D2P didn’t have the ability to have it on the left side. The D2P has minimise maximise ability that D2D and clones don’t have.

Not on Unity or on Gnome-shell.

BTW, dunno if someone linked this yet, but I found a discontinued project that brings global menu to GNOME shell.

It is fast, consumes less memory, and most importantly has the most full featured file manager available in Linux.

but I found a discontinued project

People, users, move on dropping their projects and the DE, disheartened.

BTW, dunno if someone linked this yet, but I found a discontinued project that brings global menu to GNOME shell.

If you don’t notice this yet, i was the developer of that project and of course i was who discontinued it. The reason of why is discontinued is exposed by me also here.

The reason of why is discontinued is exposed by me also here.

Do you mean that this “continuous development” of gnome-shell is actually a hindrance to 3rd party developers?

Swimming against the river flow is of course difficult.

Do you mean that this “continuous development” of gnome-shell is actually a hindrance to 3rd party developers?

But yes, it’s much worse now, because the only opposition to that tendency in the desktops with base on GNOME technologies was Ubuntu with Unity, but now is discontinued and not only that, Ubuntu developers are now part of the GNOME community and in concordance they are accepting the GNOME HIG. That means they also accepted that:

Menu bars increase the vertical footprint of an application’s user interface, introduce a large number of disclosure points, and function as a fixed set of inflexible options. For these reasons, header bars and header bar menus are generally recommended over menu bars, along with other design patterns for exposing controls on demand, such as selection mode, action bars, and popovers.

So, now the river flow of the Ubuntu developers is in the same direction that GNOME and then build a global menu in the Ubuntu desktop that is constructed with the GNOME technologies is like swimming against the river flow. I hope this is more clear now.