We are releasing a special build of Ubuntu for WSL as a sandbox for testing new features and getting community feedback. At the outset we are testing a new out of box experience and the ubuntuwsl tool, which you can read more about below after some background and disclaimers. This release will only be available through a link here on the Ubuntu Discourse, it will not be searchable in the Microsoft Store. It will be based on Ubuntu 20.10 initially but we expect the underlying release to vary over time as we A/B test and refine new features, such as 20.04 or pre-release builds of 21.04. This build is intended for early adopters in the WSL community, please read the background and cautions below.

Ubuntu has historically released only LTS releases for WSL on the Microsoft Store. We do make builds of interim releases available for side-loading for advanced users from our cloud image repository.

We limit Microsoft Store builds to LTS releases because LTS releases have the best third-party support and new users are going to have the best overall Linux experience with them. Releasing every interim release on the Microsoft Store would crowd up the Store and could be confusing for new users unfamiliar with Ubuntu release numbering. Indeed, confusion over Ubuntu version numbers is why we created the generic Ubuntu on Windows app which always contains the most recent LTS, to take the guesswork out of it. Also having new users on an LTS where they will get security updates for five years, without having to think about release upgrades, is an overall better security situation. For advanced users who want the latest Ubuntu, there are still the side-loaded builds or manual release upgrades using do-release-upgrade.

However over the past year we have been working on some new tooling around and features for Ubuntu on WSL. We would like to test these features with you, the community. But it is not appropriate to test them in our stable LTS releases on the Store nor can we test them in the side-loadable images from the cloud image repository which lack the .appx wrapping around the image which provides the Start Menu icon, among other assets. We need to test this tooling and new features via the Microsoft Store, but in a smart way. Therefore we are introducing Ubuntu on Windows Community Preview in the Microsoft Store.

Ubuntu on Windows Community Preview is only available in a direct link. It will not be searchable in the Microsoft Store, because it is not appropriate for entry-level users, for the same reasons we do not publish interim releases.

This preview build is initially designed to test our new image creation tooling and out-of-box-experience (OOBE). Later it will be used to test the new official Ubuntu theme for Windows Terminal and other features we are bringing to Ubuntu on WSL.

These new builds are built using a new tool we have developed called Ubuntu Cooker. These builds are based on a modified version of the WSL DistroLauncher.

The new Ubuntu on WSL OOBE is based on subiquity, the installer used by Ubuntu server. We are encouraging all feedback related to Ubuntu on Windows Community Preview to be filed here.

Ubuntu on Windows Community Preview is for advanced users and WSL community members to help us test and debug new features coming to WSL. It is not recommended for a “daily driver” unless you are able and willing to handle the occasional hiccup, which will happen.

The underlying Ubuntu releases in Ubuntu on Windows Community Preview will vary. We expect initial builds to be based on Ubuntu 20.10. As features stabilize and are prepared to be backported to LTS builds, the build of Ubuntu on Windows Community Preview in the Store could be based on Ubuntu 20.04, 20.10, or even early builds of 21.04.

It is also likely some test packages will be delivered by an additional PPA, not the main Ubuntu Archive. As packages are stabilized and merged into the official Ubuntu repository the PPA version may lapse out of date and need to be manually removed to get the latest version.

Unlike the LTS releases in the Microsoft Store the Ubuntu on Windows Community Preview will be frequently updated in the Store. We do not, as a rule, touch existing WSL installations from the Microsoft Store but the latest image is downloaded and cached in the background. 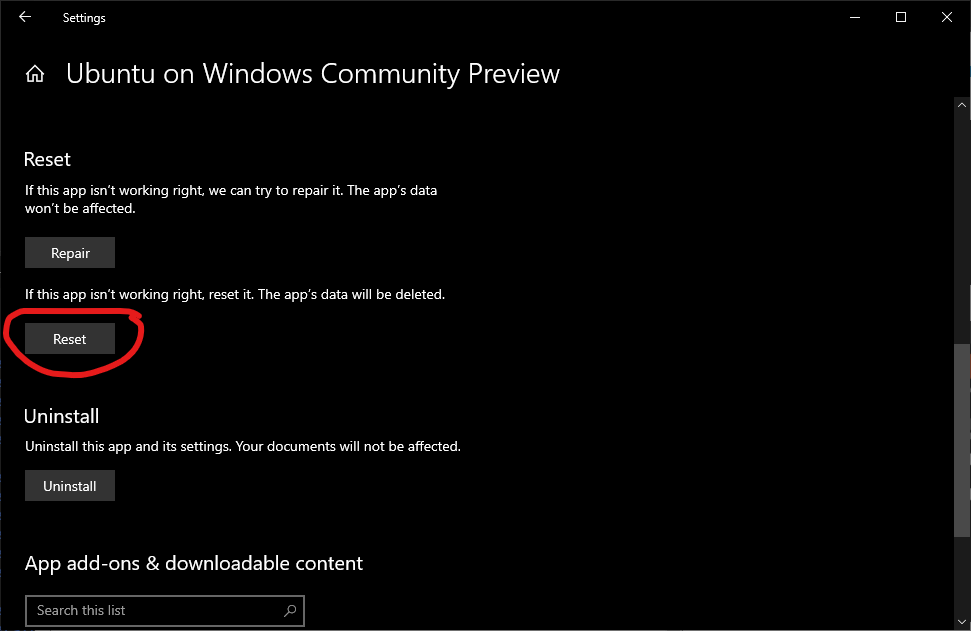 If you want to keep a backup of your existing image, use the wsl.exe --export feature.

When you reset Ubuntu on Windows Community Preview you will reset to the version cached, which could be a different version than the one you had before. Also note this background caching could involve a higher level of bandwidth usage than normal and therefore is not appropriate for metered or limited bandwidth users.

With these cautions in mind, let’s take a look at our first release of Ubuntu on Windows Community Preview.

First, the new Ubuntu on WSL OOBE experience that follows the legacy installer workflow with a refreshed design that will be familiar to Ubuntu Server users:

Additionally, we now have a command line tool ubuntuwsl to help you edit your Ubuntu WSL settings more easily:

Try it out after installation:

Download the new Ubuntu on Windows Community Preview and send us feedback on Launchpad.

Thank you to the community for helping us try this out, Patrick Wu for his work on Ubuntu Cooker and the new OOBE, to the Ubuntu CPC team, the Ubuntu Server team for their work on Subiquity, and our partners at Microsoft.

Hi, posting this here as “Reporting new bugs for Ubuntu WSL Integration is not allowed.” (Followed the link in the post but it wouldn’t let me report).

Missing space between “Ubuntu” and “to” on the Setup Complete page. 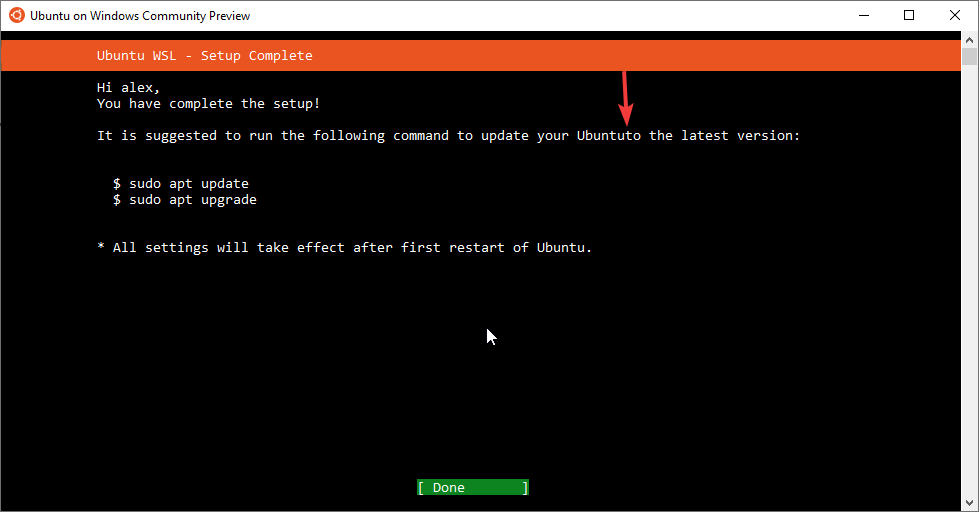 “Reporting new bugs for Ubuntu WSL Integration is not allowed.”

This issue was has been solved.

Missing space between “Ubuntu” and “to” on the Setup Complete page.

Thank you for that feedback.