Windows and Ubuntu interoperability on WSL2

Windows Subsystem for Linux (WSL) allows you to leverage the benefits of Linux package management and command-line tools to streamline your development workflow.

Some tools used during the development process are only available or are performed best on one platform and transferring data from one system to another to visualise or share can be tedious. WSL solves this problem with a feature called interoperability.

Interoperability is the ability to transparently execute commands and applications, share files, network and environment variables across Windows and Ubuntu.

We’ll illustrate all these notions by generating data from your Ubuntu WSL instance using your Windows user profile directory, perform some transformations via PowerShell scripts, and finally, visualise those on Windows. We are going to cross the chasm between the two worlds not just once, but many times, seamlessly!

In this tutorial, you will learn:

This tutorial assumes that you already have WSL2 installed with the latest LTS release of Ubuntu.

If not, check out our getting started tutorials for Windows 10 and Windows 11:

For this tutorial, we will assume that you have installed the Ubuntu main WSL application.

Once you have completed the relevant tutorial, the following steps will work on either Windows 10 or 11.

Note: in this tutorial, we consider that interoperability is turned on in WSL.conf, which is the default behaviour. If you have disabled it, you can either use the ubuntu reconfiguration tool on Ubuntu 22.04+, or, for earlier versions, directly modify back wsl.conf yourself as described on wsl.conf documentation. The settings you are interested in are [Interop]: enabled and appendWindowsPath both set to true (or not being present, which defaults to true).

Let’s install Jupyter notebook, a web-based interactive computing platform where we will generate some statistics.

Finally, let’s start Jupyter, by adding it to the user PATH first:

If you look closely at the output, you will see that the Jupyter notebook is now running, and its interface is exposed via its internal web server on localhost, port 8888.

This port can be accessed directly from our Ubuntu WSL instance via curl, lynx (a command line web browser), or any GUI web browser executed in WSL.

However, this tutorial is not about running Linux GUI applications from WSL (which you can do), or visualising data in the command line, but interoperability! So, as you can guess, any network port exposed locally is also available from Windows directly, if no conflict occurs. 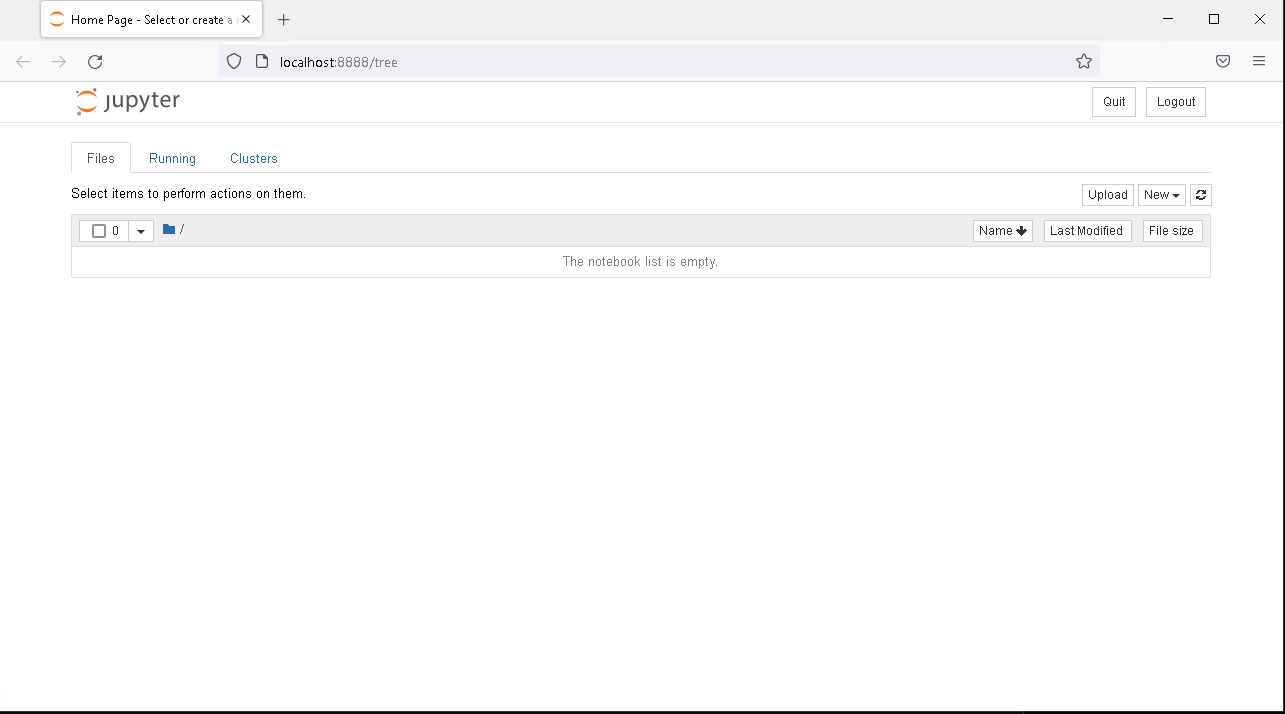 And it works! You can thus easily expose and share any services that are using network ports between your Windows machine and WSL instances!

ⓘ Note: you need to keep this command line Window opened to have your Jupyter instance running. If you close it, the service will shut down and you won’t have access to it anymore. Other command-line operations in the same WSL instance should be done on another terminal.

Our next step is to be able to generate some statistics on our Windows user personal directory. For Jupyter to access those, we need to know how to get access from our Ubuntu instance to the Windows partition(s). You may already know about it by reading documentation or blog posts, but let’s do something even cooler: let’s discover it by using environment variables!

On another terminal, under powershell, let’s first check our Windows user profile directory:

Awesome! Setting WSLENV=”ENVVAR1:ENVVAR2:…” allows us to share multiple environment variables from Windows to our Ubuntu instance. We can then retrieve the value under Ubuntu.

However, you may notice that the environment variable value was shared as is, which is fine in most cases but not for path related content. Let’s check:

Indeed, C:\Users\myuser is not a compatible Linux-path where the Windows file system is located under WSL.

But we haven’t done all that for nothing! WSLENV variable declaration can be suffixed with /p, which then translates any paths between Windows and your Linux instance.

With this, we are now ready to generate some statistics on your Windows user profile directory from our WSL instance!

Accessing Windows file from Ubuntu to run our script

After this little detour into the command line world to discover which path to use, let’s go back to our Jupyter interface in our browser running on Windows.

We are going to create a stats-raw.csv file, containing statistics about our user profile directory.

Some preliminary warnings: accessing Windows filesystem from Ubuntu is using the 9P protocol, which might mean slower access and indexing of files than native performance. So that this section doesn’t take too long to complete, we are advising you to choose a subdirectory or your Windows user profile directory, with fewer files and directories to run over. We will call it here /mnt/c/Users/mysuser/path/my/subdirectory.

From the Jupyter main screen, create a new notebook to start developing an interactive Python solution. You can do this by clicking on the New button, and then clicking on the Python 3 option, as we can see below.

Copy this to the first cell, adapting the input directory:

This script will enumerate all files under “/mnt/c/Users/mysuser/path/my/subdirectory”, get the mime types of each entry, and count them. It will write the result in your Ubuntu user home directory as a Comma-separated Values (csv) file named “stats-raw.csv” and print it as well for your viewing pleasure.

Let’s execute it by clicking on the “Run” button in the web interface. 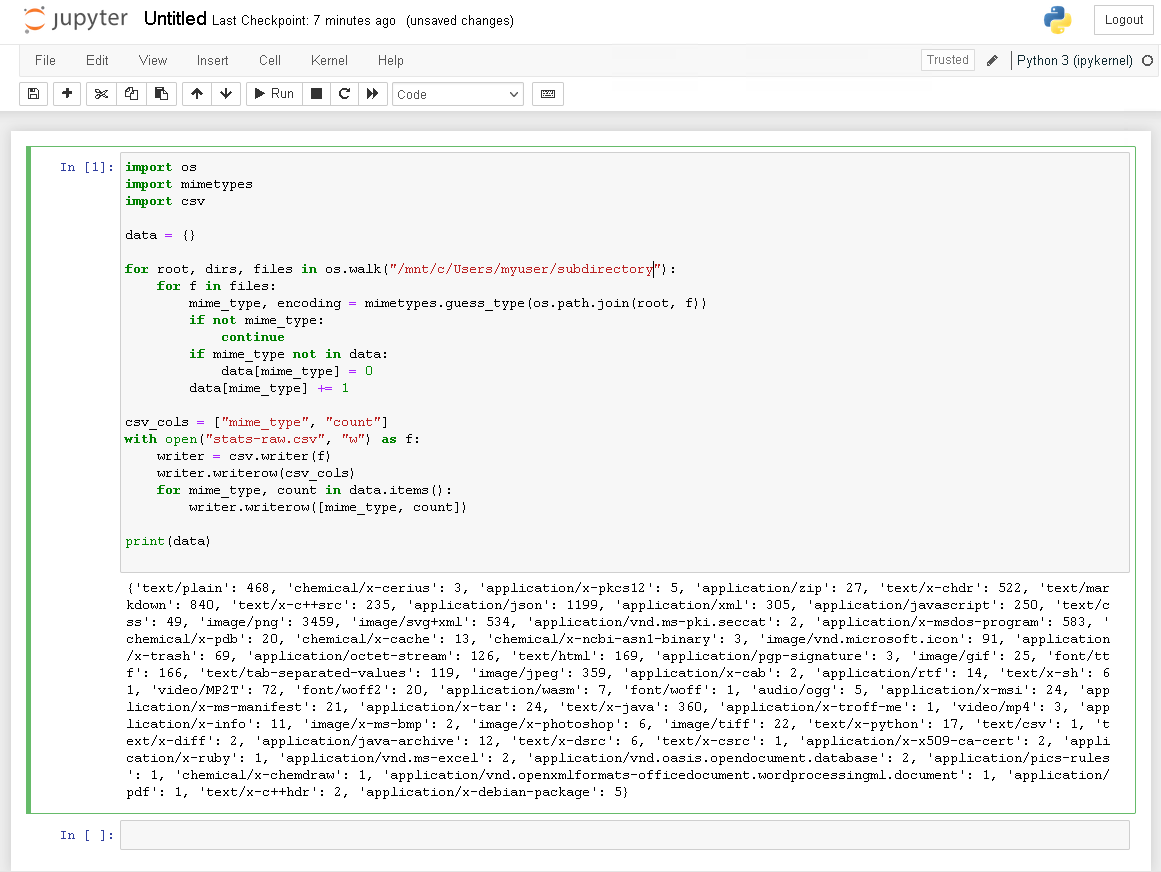 Note that while the entry is running, you will have a In [*] with the star marker. This will be replaced by In [1]: when completed. Once done and the results are printed, let’s ensure that the CSV file is present on disk using an Ubuntu terminal:

So, we now have a stat file on Ubuntu, which is the result of computation on files stored on the Windows partition. We now want to analyse this file using Windows tools, but first, can we access it from Windows?

Of course, interoperability goes both ways, and we already know exactly how to discover where those are available on Windows: introducing sharing env variable round 2!

Similarly to USERPROFILE, we want, this time, to share the user HOME variable with Windows, and let interoperability translate it to a Windows compatible path. Let’s do this right away from an Ubuntu terminal:

First, we are able to export the HOME variable to subprocess, telling us that we want to translate the path back to Windows compatible paths by appending /p as we previously saw. But this is not all: we are running cmd.exe from an Ubuntu terminal (which is itself running inside a powershell terminal), and get the corresponding Windows path! Even if that sounds a little bit like inception, using this feature is just seamless: you are launching any process, Linux or Windows, from your Ubuntu terminal. Inputs and outputs are connected and this complex machinery works flawlessly!

Open Windows Explorer and navigate to that path to confirm they are visible there: 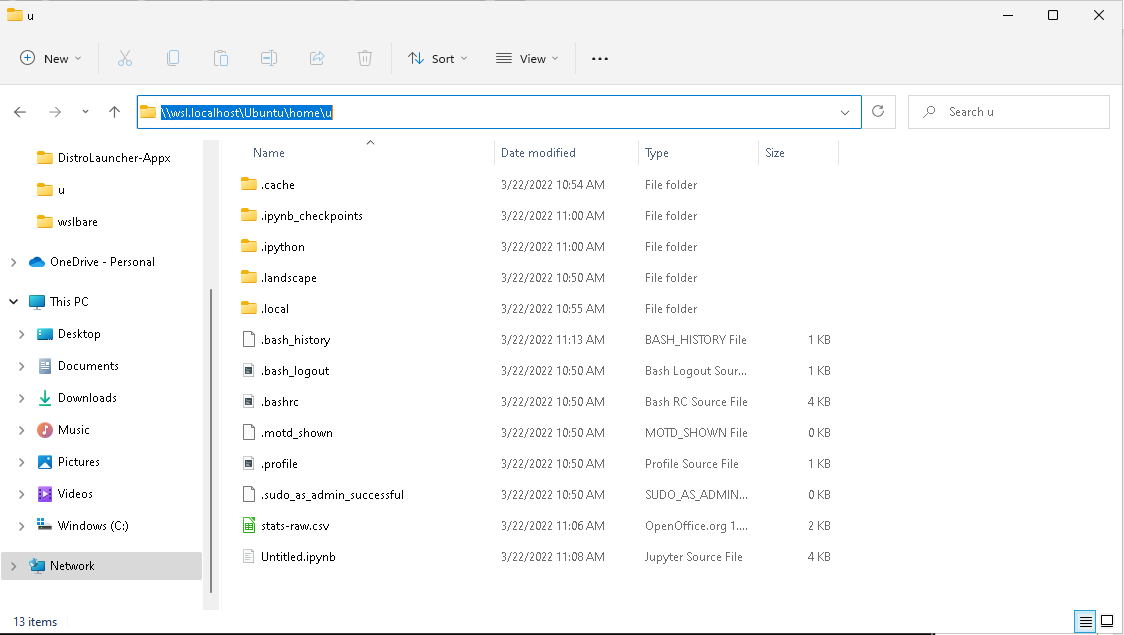 Let’s now create a powershell script, from Windows, on this Ubuntu filesystem and save it there:

You can open any editor, from notepad to a full-fledged IDE. Create a file named filter-less-than-five.ps1 under \\wsl.localhost\Ubuntu\home\<youruser> (with the following content:

After saving, let’s check it’s available on the WSL side:

This powershell script, written from Windows on your Linux instance will be quite handy to create a pipeline between applications.

This is all very impressive, we have been able to share network, env variables, paths, and files, execute processes interchangeably between Ubuntu and Windows. Let’s go one step further by chaining all of this together in a single, but effective line:

Let’s figure out what happens here:

This simple command is exercising many concepts of interoperability we saw in previous sections. However, as you can see, this is completely transparent to us!

This deep integration for back and forth access between systems allows users to create awesome pipelines, taking the best tool that is available, independent of their host operating system. To make that easy, WSL transparently converts any paths and does the heavy lifting for you so that you don’t need to do the manual conversion!

And finally, we can even run the default associated GUI Windows application associated with those files, from Ubuntu:

Note: You can’t deny it’s really amazing to be able to execute explorer.exe from Ubuntu.

This will open LibreOffice, Microsoft Excel, or any other tool you may have associated with csv files. From there, you will be able to draw beautiful charts, make further analyses, and so on. But that’s another story… 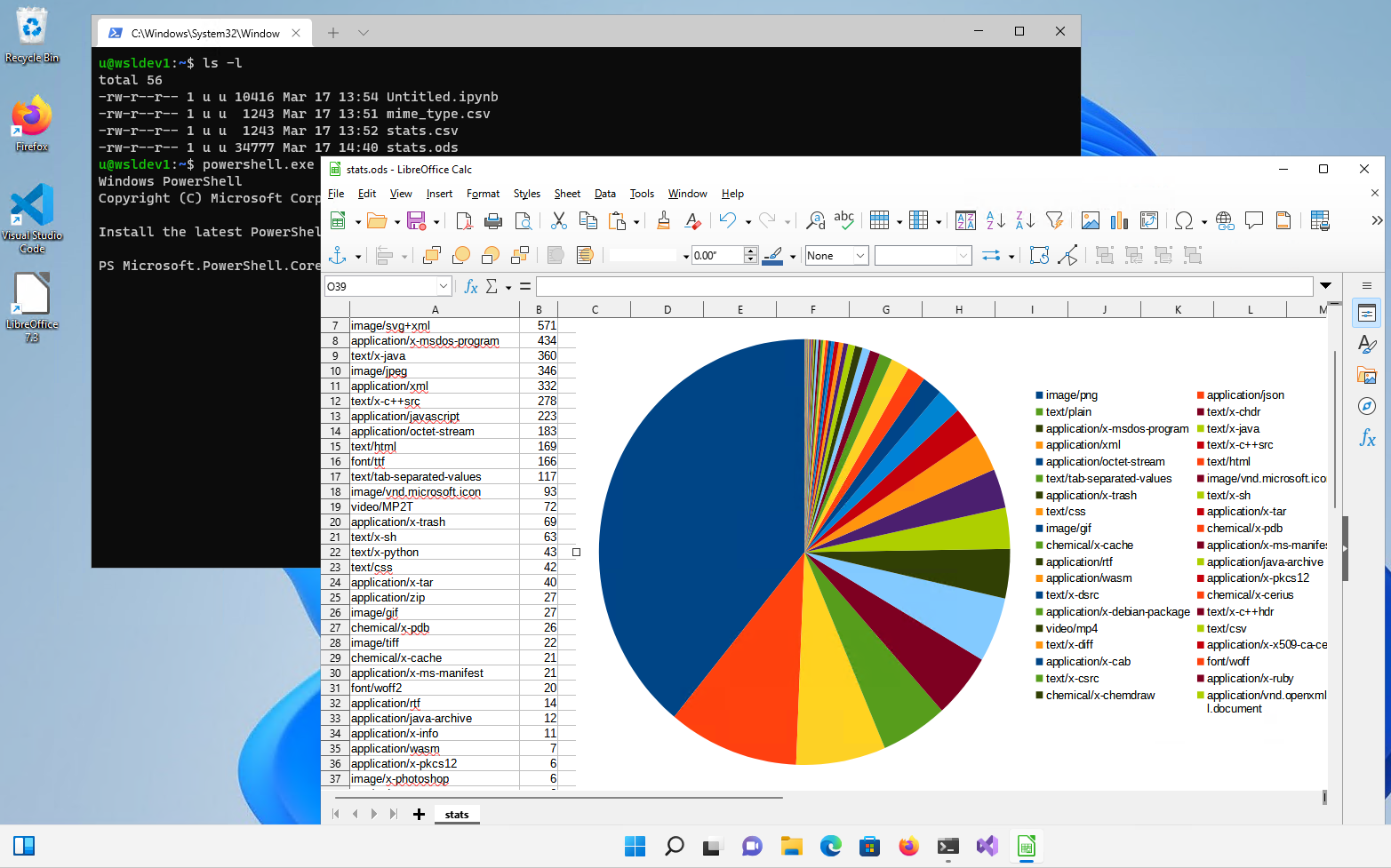 That’s all folks! In this tutorial, we’ve shown you many aspects of interoperability on WSL. To sum it up, we can:

We hope you enjoy using Ubuntu inside WSL. Don’t forget to check out our other tutorials for tips on how to optimise your WSL experience.

4 Likes
About the Tutorials category