The Ubuntu Unity 21.10 “Impish Indri” Beta has now been released and can be downloaded from the Dark Penguin server or FossTorrents. 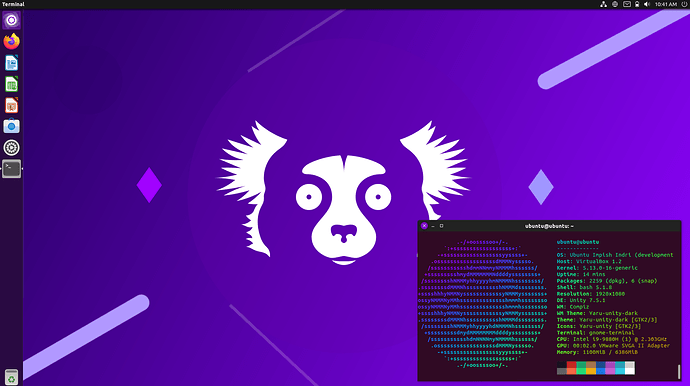 We have a brand new logo for Ubuntu Unity and a completely new Plymouth theme. The size footprint of the theme has been reduced. Besides bug fixes, we have made changes such as moving the Plymouth theme into a separate package from the Yaru-Unity7 theme. The Ubuntu Unity 21.10 artwork has been published here. Also, a few changes have been made to Unity7, such as the migration of the schemas from gnome-settings-daemon. You can also update from this release to the final Ubuntu Unity 21.10 release by running sudo apt-get update && sudo apt-get upgrade

The Ubuntu Unity 21.10 “Impish Indri” Beta has been rebuilt from scratch with a new ISO builder that we created recently. We have published the ISO builder here for anyone to use it for building remix ISOs. Check out the wiki for more information. Our friends at Ubuntu Cinnamon Remix now use this builder. Unlike live-builder, it builds the new ISO on top of an existing Ubuntu or Debian ISO. The build process is fast and you shouldn’t face any issues with the GPG key files for a PPA unlike lb when building your own flavor of Ubuntu or Debian

For support or queries related to the builder, please join us on Telegram at t.me/ubunturemixes.

We encourage you to test our beta along with those of the other Ubuntu flavours and remixes, as we are all one big family. If you find a bug in the beta, run: ubuntu-bug PKGNAME. Please join the Ubuntu Quality IRC channel (#ubuntu-quality on Libera) or Telegram group (Ubuntu Testers). You can also chat with us on Telegram at t.me/ubuntuunitydiscuss.

The Ubuntu Unity 21.10 RC has now been released. You can upgrade from an existing 21.10 beta installation to the release candidate. We are also slowly migrating our website and blog to a new server. For more information, visit our blog post (on the new server).