There have been some questions about our plans for GNOME in the incoming LTS, it probably makes sense to have a visible post on the topic with some details, so here we go.

We are currently working on updating the gnome-shell stack to the current 41 stable version and then we will start working on the 42 updates, aiming to get that version included in the LTS.

On the applications front we will be more conservative, avoiding GTK4, at least for the software we install by default for several reasons.

We will update the applications which are still based on GTK3 though.

Note that GNOME is working on adding a dark style preference this cycle, we will try to ensure we make use of the corresponding capability in the new libhandy for the applications which aren’t updated. We need to check how well that works with yaru (if anyone from the yaru team reads the post and knows the answer please share

but if it does we will cherry pick the settings change to add a control for it.

We hope to get the libadwaita coloring situation resolved in the next cycle and will update to the new GTK series once the LTS is out.

A sensible choice for the LTS. I would have chosen the same route myself

Upgrading a single GNOME app is simple enough to do manually if an update is really needed (via flatpak, maybe there will be a PPA). But compiling and updating mutter and gnome-shell is rather difficult and prone to break the system.

And just updating from GTK3 to GTK4 is not going to offer a user benefit per se (aside from the built-in benefits like hardware acceleration).

I hope you guys can go for 5.16 kernel so we the people with Realtek 8852AE finally can have working WiFi out of the box thanks to the new drivers added in this kernel!
Considering the time you have until the release of the next LTS this kernel will be rock solid and makes no sense to go to something older!
One thing I am not really happy about is old Gnome version and old kernels in the LTS releases! A new release with already outdated internals is bad look!

Yes. It would be fine to have it updated to version 42 though.

Note that GNOME is working on adding a dark style preference this cycle, we will try to ensure we make use of the corresponding capability in the new libhandy for the applications which aren’t updated. We need to check how well that works with yaru (if anyone from the yaru team reads the post and knows the answer please share

but if it does we will cherry pick the settings change to add a control for it.

only GTK-Apps that make use of HdyStyleManager from libhandy v1.5.0 gain the ability to support the cross-platform dark preference that uses the values prefer-dark, prefer-light and default taken from org.gnome.desktop.interface.color.scheme. From Yaru-side the support is already present for this as we get automatic trigger of any new-changes made on libhandy via Github Actions and then get applied to Yaru (keeping it always in-sync with their master branch) 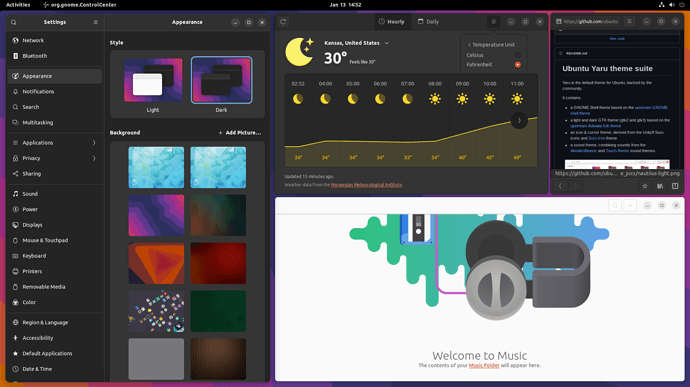 Sounds good, thanks for the update!

We are currently working on updating the gnome-shell stack to the current 41 stable version and then we will start working on the 42 updates, aiming to get that version included in the LTS.

Will Settings (gnome-control-center) be updated to GNOME 42? The reason for the question is that it is a GTK4 + libadwaita app. We on Ubuntu Budgie also use Settings on our desktop. Upstream Budgie have recently forked Settings at GNOME 41 to continue development avoiding libadwaita. I’m just wondering how hard & fast I need to run to get this fork this into Debian/Ubuntu.

I don’t see any reason for Debian to not get GNOME 42 components as soon as early March. When I packaged gnome-text-editor, it took a month to get accepted through Debian’s NEW queue. (It is possible to get faster review if you find a ftpmaster and explain why your package needs higher priority.) It’s easy and quick to get a new package in to Ubuntu if it was already accepted into Debian.

I don’t see how avoiding gnome-control-center 42 to avoid libadwaita will help y’all much at all. GNOME developers are literally converting almost everything in GNOME Core to GTK4+libadwaita for GNOME 42 and Ubuntu Budgie uses a lot of GNOME apps. Instead, Ubuntu Budgie might be able to use the same approach that the primary Ubuntu Desktop will use.

Much appreciated for the info. Certainly the March timeframe is useful so we can have that as a target for Debian.

As an aside - we have already a target list of suitable other apps in the archive so we can drop GNOME apps as they move towards libadwaita.

While I doubt GNOME developers would like it, simply patching the stylesheet in the libadwaita package could be doable to get a theme fitting with ubuntu.

The 5.15 kernel is a Long Term Support kernel, so my guess is that they’d want to stick with 5.15 for the additional support from upstream.

The topic is about GNOME not about the kernel please try to not sidetrack the discussion. In any case the plan is to use 5.15 for the LTS but the oem and hwe variants will get 5.17 as some point.

I am really looking forward to having GNOME Shell 42 in the next LTS.

I also hope that the LTS can adopt as much of the remaining GNOME 42 software stack as possible. I disliked when Ubuntu ships GNOME Apps scattered across three different versions as this sometimes creates a problem with the interoperability or just because I couldn’t use newer features or bug fixes.

If this doesn’t work out, you could always remove mismatching versions from the apt repo and just ship snap/flatpak packages that are updated automatically. Who wants to use a 5-year-old browser (GNOME Web) anyway?

Fair enough. But it might not be necessary. Let’s see how things go this year.

Well, overall an understandable course of action, albeit a bit unfortunate (for some).

At least for me, the question here is: will this possibly create more work than problems over time because you still have to maintain the old versions?

But there is no question if some things (like Yaru for now) don’t work at all - I’m curious how theming will work at all in the future (with libadwaita) or whether theming will have to be reduced to the bare minimum anyway. Like colors and icons. In that case you could go all in with GNOME 42 and use Libwaita… if of course the quality of the apps and programs in GTK4 is good enough. From what I’ve seen, the apps are primarily adjusted, the first point release should take about 3 weeks and is maybe in time for Ubuntu (when reading the PS part).

But I think you have a lot more insight than most of us, it’s clear that each of us would rather have the freshest and newest. Because it’s an LTS release it looks like you have to think a little more conservatively and can’t fix with updates over the next few weeks after the release – because the release ISO has to work flawless.

PS: The time from the GNOME release to the Ubuntu release is also very short, would have recommended just to make some more time here. One week more time for the developers, still a 22.04 release. Don’t think this will throw anyone off course. Most of those who need a stable system wait at least a few weeks with the update anyway, even after an LTS release. Recommended for every release in the future if you build on top of GNOME. IMHO of course

Thanks for the great work!

I would’t mind a future 22.05 and 22.11 release cycle either. Two or three weeks more testing and more time to properly test, fix and adapt.

I understand why this decision was taken, though it is a slight disappointment as someone who typically runs the vanilla GNOME session and who is quite excited about the move to GTK4 and libadwaita.

Slim chance, but just asking to be sure: Is there any chance of an official PPA for the core GNOME 42 apps to be made available to the LTS users at some point after release?

We are not going to work on an official ppa since we limited on resources, but it want new shiny version over stability you should be able to upgrade to 22.10 once it opens and get the updates with the new serie.