Ubuntu could use lollipop instead of rhythmbox

Straight to the title:

Tried it over several weeks now after rhythmbox kept crashing way too often and from my experience it is much more stable also faster and more responsive. Also it uses modern gnome design without any add-on.

Also you can search music with it with the super gnome search, much like in unity7.

First of all - have you added lollipop to the list of snaps, wished for ?

And secondly, after installing using the deb package - I added a radio station that I got from here (2xm),

and … unfortunately not only does it fail to work or implement the radio station into the program, so that I can hear the music actually play, but also - I cannot understand how the program would “record” the music that I am listening to with my laptop ?

At the moment if I want to the whole ‘record streaming music’ thing - I have to use audio recorder (program) - which doesn’t even have a graph to show music levels that is being recorded, which is pitiful.

So unless I can actually attain streaming from the first step - it could be argued that this is too under-developed for bionic beaver 18.04

No I did not put it on the wishlist yet.

Did you try the ppa version in 17.10?
It is Rock solid to me
Rhythmbox Crashs just for the sake of it are starting. And my library is not that big

Rhythmbox Crashs just for the sake of it are starting. And my library is not that big

I trust you filed a bug report against Rhythmbox?

Lollypop is python and appears buggy to me. Rhythmbox on the other hand is much more feature proof and has a powerful plugin API which makes it so much more better. Beside, Rhythmbox has proper desktop integration for other non gnome-shell desktop (like unity, flashback, xfce) as well where Lollypop only works well under gnome-shell.

So a big NO from me.

What does this mean, it appears buggy to you?
Ubuntu 17.10 here and up to date lollipop from his ppa, totally rock solid.

I can confirm the frequent Rhythmbox crashes. Anything that is remotely stable would be an improvement.

Yes, I have no idea where the lollipop crash rumors come from.

I don’t think there’s a need for that. The Ubuntu Desktop Team members (including Canonical employees) are subscribed to Desktop topics here.

No need. Canonical folks see it.

Changing a default application is not done lightly by the Ubuntu Desktop Team. The changes affect millions of installs, disrupting happy user habits and/or company workflows. The potential backlash of millions of angry users creates a rather high threshold to seriously consider change proposals.

Rhythmbox may crash for you. But that doesn’t mean it crashes for everybody.
Similarly, Lollipop may crash or fail for others, but not you.

If you are really serious about proposing this change, then start looking at previous similar discussions on the Ubuntu-Desktop mailing list. Here is the starting point discussion on that list when Rhythmbox was originally added. Many of the same issues will arise.

A change request may go in directions you don’t anticipate. Example: A new player may be selected that is neither Rhythmbox nor Lollipop but something else. Remember to keep your discussion civil. Be patient. Be positive. Proposals that are argumentative or devolve into I-am-right-and-you-are-wrong are often simply dropped without further comment.

Yes ofc. What I meant was client side decorations, sorry if that was a little bit vaguely described.

We would have the advantage of getting a fresh and actively maintained music application into 18.04 without the urgent need to clear all bugs of rhythmbox until april.

While some LTS users could be unhappy to see their music app changed, they could also be unhappy of having an unstable music app.

If you have an 17.10 installation on some machine or virtual machine you could compare the up to date lollypop from the ppa (ppa:gnumdk/lollypop) with a medium size library to rhythmbox in 17.10.
I reinstalled rhythmbox and cleared all files in cache and .config before trying lollypop but I was convinced quiet fast by the stability AND the really good design

they could also be unhappy of having an unstable music app.

The problem is that it isn’t unstable for many users, are you saying that it’s more unstable on 18.04 than 17.10? In which case, which bugs are those and can you link to them?

Example: A new player may be selected that is neither Rhythmbox nor Lollipop but something else.

I think this would be likely. You find Lollipop amazing, but others have said it seems buggy to them (just as Rhythmbox seems buggy to you - people have different experiences with different computers) and there are tons of media players for the Linux desktop elsewhere, so if Ubuntu decided to switch away from Rhythmbox (perhaps to GNOME Music eventually, since that seems to be the next-gen music player for GNOME?) to one of the other alternatives, it’s probably unlikely to be Lollipop, especially considering that your good experience with it doesn’t seem to be the same for everyone.

If it were available in Ubuntu Software as a snap or deb it would be great. No need for a PPA then, and whomever wants to use it instead of Rhythmbox, can.

A lot of mention of Rb crashing/unstable without any specific bug(s) mentioned…
Seems to run well here in 18.04 with small exception of audio cd’s due to a not yet addressed bug in libcdio17

Yeah after all one can still use lollypop anyways - if it is preinstalled or not.

If there would be another survey (after the initial unity - gnome transition survey) about default applications, maybe this question could be asked too. I.e. which default music app should be used: rhythmbox, lollypop or gnome music.

which default music app should be used: rhythmbox, lollypop or gnome music.

For Lollypop to be even a contender it has to exists in Debian. Then Ubuntu can sync with. It usually takes 2-3 months (or more) to get new packages in debian. So it’s out of 18.04 time frame. However it can be done for next cycle.

If there would be another survey (after the initial unity - gnome transition survey) about default applications, maybe this question could be asked too. I.e. which default music app should be used: rhythmbox, lollypop or gnome music.

The question was asked, Lollypop came 12th and Rhythmbox came second to VLC (I guess Rhythmbox is being kept as default because a) status quo bias is often a good thing in a Linux distribution, we don’t want the default applications changing every time we do a survey and a different application comes out on top, and b) it just ‘makes sense’ to keep it because it’s a GNOME application that works well, even if VLC potentially works even better when it just comes to playing music) 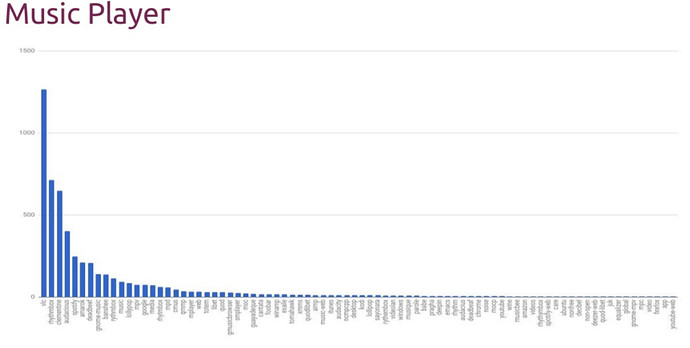 Your point implies maybe you already know this, I don’t think we should be doing constant surveys of the Ubuntu userbase so I don’t accept your call for another one. Perhaps another in a few years (or longer) would be good. To get a good response it has to be pushed hard and I don’t think people will be willing to participate in a poll all that often.

Source: slide 40 of the slideshow at the bottom of this page

lollypop is current not even packaged in universe which means we got little feedback about it so far, it seems like it would be a good candidate for a snap though

I guess you mean “application which fits the GNOME HIG”. An application that doesn’t’ use GtkHeaderBar is not any less “modern” than one that uses it.

By the way, i’m happy with Rhythmbox. Actually, i find the big playback buttons since 3.x a bit ugly.