I have uploaded new unity-settings-daemon and unity-control-center in the maintainers ppa which fixed the issue of crashing u-s-d due to missing/dropped gsettings background schema. It will also pull new version of gsettings-ubuntu-schema. You can help testing by installing those packages from the ppa until they land on universe.

Changing wallpaper now works as expected. In the absense of nemo-desktop u-s-d changes the wallpaper both in desktop and lockscreen.

I have uploaded Yaru-Unity7 to the maintainers PPA and all the changes in Yaru-Unity7 are being upstreamed to Yaru.

Here’s a screenshot of Yaru-Unity7 on Ubuntu Unity: 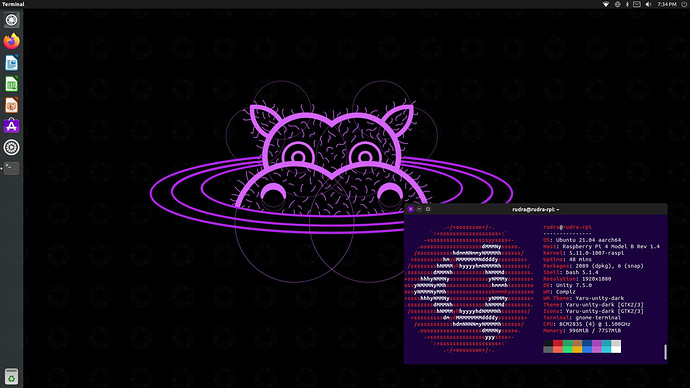 Hi, continuing from chat, Unity not working any more with nautilus 3.26…it is now pulling nautilus 3.38. Why is that? We still provide nautilus 3.26 for unity remix. You said unity using org.gnome.nautilus.filemanager2…but it seems nemo is also affected…can you provide patch for that ?

Unity now requires Nautilus >= 3.38. And yes it is now using org.gnome.nautilus.filemanager2 as the old patches for nautilus were dropped. I am not sure if it is possible to support both version of nautilus. You need to ask @3v1n0

but it seems nemo is also affected

Didn’t get you…Why would nemo use org.gnome.nautilus.filemanager2?

@khurshid-alam it’s potentially possible to support also the old API, but would probably need to make the GNOME filemanager class to be a bit more complex.

I guess it’s possible though, by checking the available names in the bus.

We needed to update the support for the new API as we wanted to remove some patches in nautilus, but keeping the compatibility with unity.