Historically we have published the artifacts necessary to netboot the d-i-based server installer. We should publish them for the subiquity-based installer too.

For releases 18.04 and prior, we provide reasonably convenient instructions and artifacts to netboot a machine into a server. We should do the same for later releases (and also provide instructions that work with UEFI!).

For 18.04, we provide an entry point (https://cdimage.ubuntu.com/netboot/bionic/) that leads a user to a tarball they can untar at the root directory of a tftp server such that a netbooting machine can be pointed at “/pxelinux.0” in this directory via BOOTP and end up in an installation environment.

We should provide a similar entry point for newer releases (and also make UEFI boot equally easy to set up). This will take the form of a set of files (and a convenience tarball containing them) that will be published in the same directory as the dailies. So the https://cdimage.ubuntu.com/ubuntu-server/daily-live/current/ directory will contain a directory ‘netboot’ which will contain directories ‘amd64’, ‘arm64’ and so on. Untarring the supplied tarball into the root directory of a tftp server and configuring bootp as documented will result in a working netboot environment. It will be possible to untar tarballs for multiple architectures into one directory without conflicts.

The bootloader config will need to include a URL for the ISO for the installer. By default, we’ll point to the directory the netboot files were downloaded from, but we should make it as easy as possible for the user to override this (maybe by adding a specific file or something).

Every architecture needs a kernel (which will be called “$arch/linux”) and casperized initrd (which will be called “$arch/initrd” – except for s390x where these have different names to match user expectations, see below). Additional files are needed per-architecture (yes, this is a screenshot of a google doc, discourse’s table support is annoying): 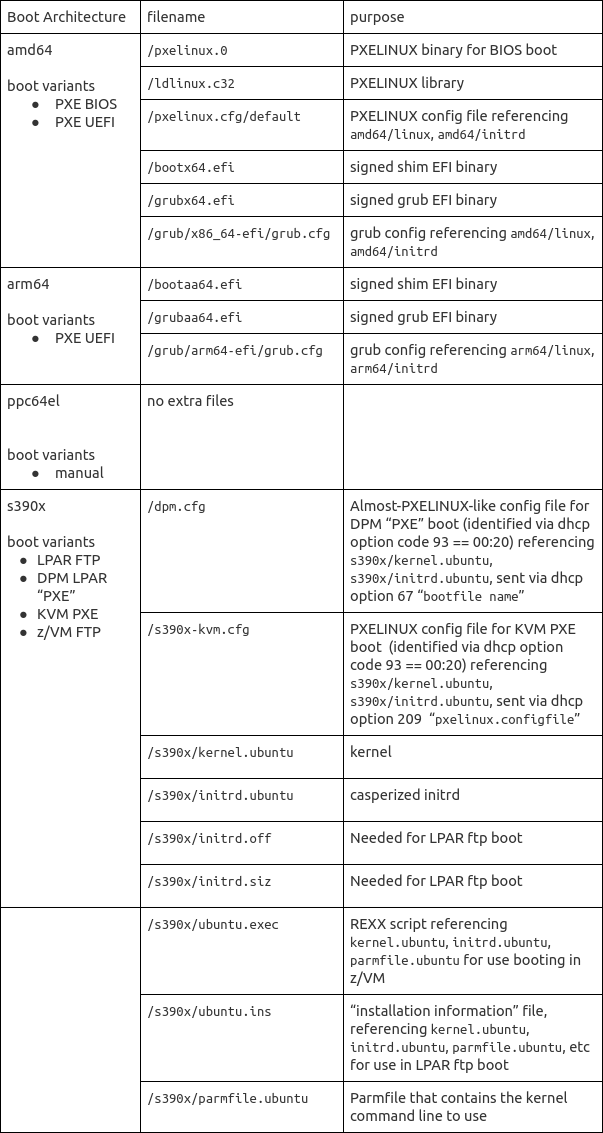 We should configure the e.g. https://cdimage.ubuntu.com/ubuntu-server/daily-live/current/netboot/amd64/ directory listing to contain or link to configuration snippets for at least dnsmasq and dhcpd.

Most of the implementation work for this will be making changes to lp:ubuntu-cdimage. It already copies most of the files we need around when making a live server ISO:

We will probably need to write some code to generate the grub and pxelinux config files.

Netbooting the Live Server Installer via UEFI PXE on Arm (aarch64, arm64) and...

One day we may want to support booting via grub for amd64 BIOS rather than pxelinux.0 as we don’t use syslinux for anything else currently. But the network code in grub that would be used for this is not battle tested (to put it mildly).

For bionic amd64 we ship at http://archive.ubuntu.com/ubuntu/dists/bionic-updates/main/installer-amd64/current/images/netboot/: 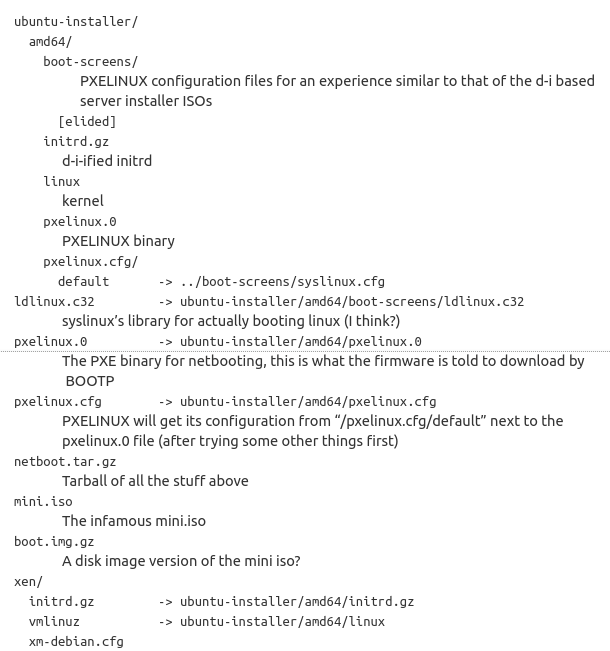 The tl;dr is that you untar the netboot.tar.gz archive at the root directory your tftpd is serving from and then point the machine you want to netboot at “/pxelinux.0” on this tftp server via BOOTP.

Bah I can’t get discourse tables or images to do anything useful. Try this link for the table of filenames.

What are the chances of this being implemented? What do you need? How can I help?

I don’t use the grub part since we have our own ipxe-based PXE boot, but the d-i-ified initrd and kernel is quite central to our installation process.

A process that is failing with the latest machines from Dell since the kernel for 20.04 is too old (5.4.0-42) and the machines are not able to load drivers for the nic.

I am working on the implementation right now, so hopefully there will be something to test soon (for kinetic to start with). But note that this is still not a d-i based installer: d-i based installations are not coming back.

All of the artifacts that are going to be in the netboot tarball are already available, if not very conveniently (the kernel and initrd can be extracted from the ISO, the bootloader & grub bits are in various packages in the archive, etc).