I propose that we switch our default remote desktop client from Remmina to the new GNOME Connections app.

Ubuntu Desktop currently includes Remmina in the default install (although not in the minimal install). Remmina has been Ubuntu’s default remote desktop client for a decade.

One of the early unique GNOME 3 apps was GNOME Boxes. Boxes was introduced as an innovative app mixing together virtualization and remote access. You could use it to connect to virtual computers running on your own computer or remotely. The remote computers could be virtual but did not have to be.

Although GNOME included in their list of core apps, it wasn’t included in the default install for most GNOME distros except for Fedora. My opinion is that while virtualization is a neat feature, it isn’t yet something that needs to be pre-installed on every computer in the office.

GNOME included Connections in its core apps for the first time for the GNOME 41 release.

GNOME Connections supports RDP and VNC. In the future, it is expected to support SPICE and SSH. The user interface is very simple.

GNOME Connections is a GTK3 app. As a core GNOME app, it is expected to switch to GTK4 soon, but not in time for GNOME 42 or Ubuntu 22.04 LTS.

GNOME Connections 41 is available in Ubuntu 21.10 or in the current development release 22.04 LTS. The version in 21.10 has some bugs that were fixed in the newer release.

From a MIR perspective, it adds a new dependency: gtk-vnc. gtk-vnc was previously in Main as a dependency for Vinagre and Virt Manager.

I don’t think demoting Remmina to universe will reduce any other dependencies in main.

In general, I think it’s helpful for our users to include simple apps that work well by default. People that need more complicated apps are welcome to install those instead.

I don’t connect via RDP or VNC much so I’m looking for feedback. Is the GNOME Connections app adequate for inclusion by default in 22.04 LTS or should we wait until afterwards? Are there critical features that are missing? Are there major bugs? 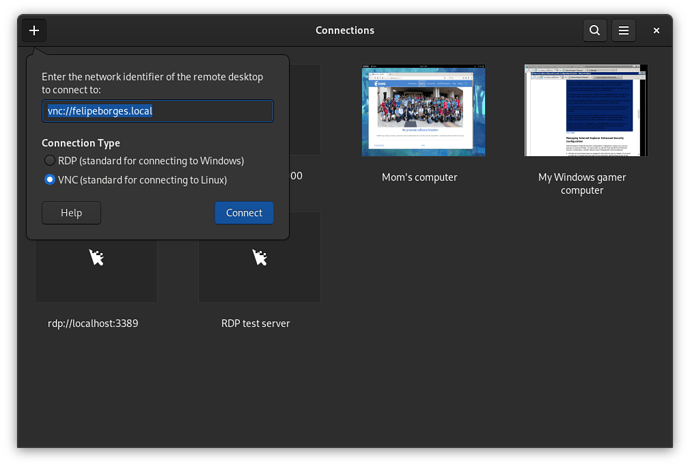 Remminas UI really needs some love but it works incredibly well.
I got a bunch of machines at work I need to connect to and the connections are all saved. I can copy connections to create new ones and the thing works very well.
I would say that the average user doesn’t do much more remote desktop connections than virtualization so maybe the feature rich client with the outdated UI could be preferable if the features are what make the application interesting for power users.
A feature comparison could eventually help. Remmina has convenience which makes it really comfortable to manage many connections

We should consider this for 22.10. For the LTS we should avoid the risk. I would love to hear what people think about the state of GNOME Connections and perhaps create a list of features we needed to meet our user’s needs.

A feature comparison could eventually help

Honestly, Connections seems like a very simple app. But since you’re a frequent remote desktop user, I’m curious to here how well it works for you if you’re able to try it out at work.

Let me share my impression of the GNOME Connections app.

I’ve been using Remmina since the beginning of the pandemic for remote access to my office computer. It is a daily driver for me which is used for full-fledged work on the remote computer. I’ve checked Connections and that’s what I can say about it.

The latter two drawbacks are quite minor. Still, the former two are very severe, I think. With these issues, Connections cannot be seriously considered as a substitute for Remmina at the moment. It is not yet a tool for real work. It looks now as a kind of toy for novices to easily try a concept of remote connection. At least, this is the first impression I got of the current state of the app. Of course, maybe I missed something or took something wrong. In this case, please correct me.

I tested Connections on the following configuration: