How could proprietary graphics drivers be more up-to-date by default on Ubuntu (without needing to add a PPA - could they get a special Stable Release Update procedure or be put into Ubuntu Backports with Backports being made more discoverable) and much more easy to find (obviously snaps are the ideal way of having properly up-to-date software on Ubuntu but perhaps that’s not possible for graphics drivers)? What’s the package for the GNOME first-run screen on Ubuntu called? Could a link to installing the proprietary graphics drivers be included on that?

I’m sure I saw a response from @willcooke to one of Jason’s Tweets before but I don’t see a reply from him to this one? Not that he has to reply to all of them but thought he said something to do with this, maybe not…

Edit: I found Will’s Tweet sorry! Perhaps updates/progress could go here? Or is it on the Ubuntu Desktop team Trello?

In over a decade of linux USER (NON-Technical) experience only once experienced a driver problem, that when I installed a proprietary driver

once uninstalled, system reverted to linux driver, and everything worked fine :- )

My thanks always to those who contribute their expertise for this !

BTW while mostly kept up to date, am not trying test latest experimental driver.

I agree with this. Sometimes, the latest drivers in the official Ubuntu repo isn’t the latest one that gamers would need (e.g. Steam Play requires NVIDIA 415), and would need to install a PPA just to do it.

Maybe have a meta package for NVIDIA’s short-term and long-term drivers. That way, drivers would update to the latest version whenever the user checks for updates. When I was in NVIDIA 396, I didn’t realize that NVIDIA 410 was already released in the PPA.

And I just found out that NVIDIA released v418 as the latest long-term driver. Cosmic’s official repo is still stuck at v390. And 410’s no longer supported by NVIDIA, I think

Speaking of NVIDIA 418, will Disco get that driver? The official repo only has 410, and it doesn’t have 415, which is the current short-term driver.

About AMD’s open source driver, is there a way for 18.04 and 18.10 to get the best performance without manually updating the kernel?

The general user will most likely be interested in updating their system through the official channels, and not want to manually install another kernel, and it might put them off if they can’t get the best performance on the latest Ubuntu.

This is a great point and should be addressed ASAP, it’s really essential to get these official drivers from AMD, NVIDIA and Intel available from official channels for users to easily install as fast as possible.

The built in driver manager is very easy to use but all that hard work on providing an easy to use GUI for a comfortable UX is lost when new Linux gamers are forced as one of their first experiences in switching to Linux to use the terminal to manually add PPAs just to install the latest NVIDIA drivers, because the drivers available for the driver manager are so far out of date.

And it is really important when these proprietary drivers perform magnitudes better, which is obviously the most important thing for new Linux gamers.

With gaming on Linux now starting to become a big thing, it’s really important to get this right. Steam Play is becoming a huge hit and drawing in lots of users and it’s really souring the experience of those new Linux users that one of the first things they discover is that the driver manager has outdated drivers by a mile and they need to go through the technical process of adding a PPA just to get the latest drivers.

There surely has to be a way to ensure the driver manager always has the absolute latest drivers available.

Recent example of someone lost and having to seek help on Reddit to deal with this confusing situation:

When the process for simply installing up to date drivers for your GPU is so complicated you have to go to reddit to ask for help and need a tutorial that explains terminal commands, it’s not the user who is doing something wrong, it’s the OS. We really need to fix this.

Most who choose to read this thread already agree that this is a problem to be solved, so let’s cease the +1 posts here, please.

Try to avoid the classic “somebody else does all the work for me” trap, and do please try to ensure your ideas are consistent with the relevant license(s).

As far as I remember there is a “plan” or a ticket to move software-properties-gtk functionalities into gnome-software… ah there it is: https://trello.com/c/KI4kj5Ag 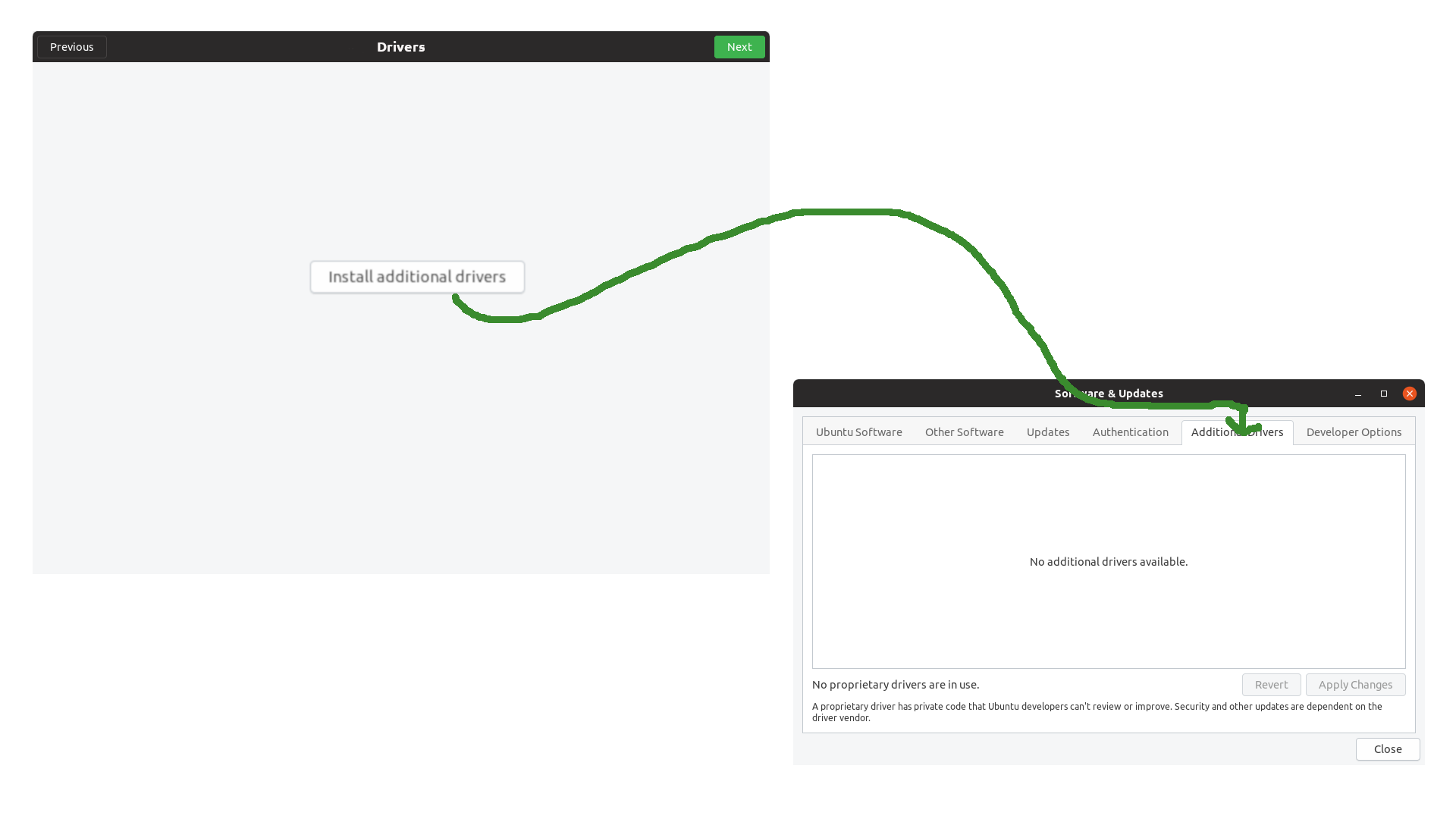 I’m not sure a noob user would necessarily know to press that button to resolve certain issues… they might just skip that stage and then not know how to resolve it later… I know it’s a quick ‘fix’ but I’m not sure it resolves the problem.

The button could me made bigger and marked as .suggested-action

And the text could be “Find additional drivers” instead of “install”

Yes, dirty quick fix. Not a long term solution, which is pretty much that Trello card

Also it’s not certain that driver issues would be easily diagnosed and resolved in the majority of new user cases currently not being easily resolved even if ‘Software & Updates’ was merged into ‘Software’?

I really like your idea. Even if it’s not the final fix, it would be a great temporary fix until the final solution is ready.

I think Ubuntu should have a separate official repo for graphics drivers bundled (but not activated) by default, which would include up-to-date open graphics & proprietary graphics. That way, all they would have to do is go to Software & Updates utility and mark the checkbox to enable it. I think a user won’t have to feel like they’re “hacking” Ubuntu that way.

That should work, right?

I think that would be an elegant solution. Stable drivers by default, newer and better with just a tickbox. It would be easy to instruct a user how to do that as well, most would probably stumble upon it anyway as soon as they boot Ubuntu for the first time and go exploring through the settings. Good idea Yami.

I just found out that the nvidia-driver-410 in the official repo is actually version 418. Wouldn’t it be better to label the package as nvidia-driver instead? I have the graphics driver PPA, and I’m trying to troubleshoot this weird graphics glitch on Plasma with version 418. I had to manually list the packages I wanted to downgrade, which was a complete pain, IMO.

They aren’t in the kernel, unless you’re thinking of Nouveau

No, I’m thinking of the HWE packages, which also include mesa and X as well as the kernel. What I’m unsure is if they also provide nvidia proprietary driver updates.

As far as I’m aware, it doesn’t. Bionic officially comes with nvidia-driver-390.