Yes, if you have gnome-software-plugin-snap installed

But it does make me wonder, what’s the advantage of the snap Software Center then? Seems like the deb version can do all the things the Snap version can and more.

This really wasn’t mentioned at all in the OMGUbuntu article, but snap packages are automatically updated which is great for a release like the LTS that will be around for many years. And installed Snap packages normally checks for updates several times a day and then installs it automatically.

As @madsrh says, it allows the team to iterate fast, deliver new features and fixes faster than revving the deb in the archive.

A secondary benefit, is that users of older releases such as 18.04 and 16.04 can install it, and get all the benefits of the new releases.

Can I turn off the automatic updates? I have a limited connection and I really hate it when snap does this. I’d also like to install updates when I want to so this is very important for me.

I made a video about this very subject just a couple of days ago. It covers delaying / deferring updates, and even configuring putting updates on hold when you’re on a limited connection. Should answer all your questions. if not, feel free to come back and ask.

No, there will be only a snap.

Would those ‘default’ snap apps still be available in the repos as debs, or are you taking them off the repos?

I love that feature, for example I use Firefox beta snap, I don’t have do anything to it as it gets updated in the background for me and I will have the latest beta on my system. Very handy.

Would these be accessible via the new Snap Ubuntu Software store?

This one raised new questions for me (perhaps this is off-topic, could move this post to the snapcraft forum?) 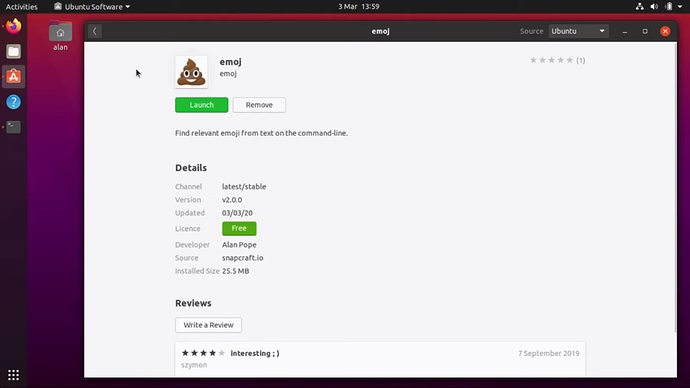 That source dropdown in the top-right, is Ubuntu Software finally grouping the same app in different formats (Deb, snap, Flatpak (the latter when the plugin is installed)) on the same page?!

Switching off updates completely is not something that’s currently on the roadmap. However there are ways to work around it. If you snap revert (snapname) it will go back to the previous release, and won’t be updated. In addition, if you snap download (snapname) and snap install (snapname) --dangerous you’re opting out of updates for that snap too. If you’re creative, yes, there are ways to avoid auto updates.

So far in my test yes, it seems like Apps are being grouped into, where you an choose Snap or Ubuntu repos. Not sure about Flatpak, I should try it out.

@popey I’m sorry but honestly this deferring thing sounds too much like Windows 10. I want no auto updates, period. Even Android and iOS allow that via a simple settings toggle, why can’t snap?

I don’t completely understand why people compare this to Windows 10 as if that’s a bad thing. If you have any kind of history in the computing industry (or indeed didn’t live under a rock over the Windows 95 through Windows 7 era) you’d recall how users didn’t update their systems, and thus missed out on security updates. The platform was rampant with virulent malware. Having a system which encourages people to stay up-to-date is a good thing.

Why no toggle? Because we want to ensure people are up to date, that there’s no machines out there running outdated and insecure software. Sure, we could put a big fat switch in there which turns off updates, and that would please you and a few other users.

Meanwhile what we have seen happen is bloggers write articles listing “10 things to do after installing Ubuntu” and one would be “Turn off updates”, “Just click this button”. Users will blindly copy and paste the instructions, turn off updates, and thus be less secure. This is not hypothetical, it happens. They don’t understand the implications of their actions. There are millions more of those people than there are of you. We try to cater to the widest possible audience we can, so we try and do the best for the majority, which is, automatic updates, not easily turned off.

Alright, I do want auto updates.
This discussion is pointless. It is not what you want or what I want. It’s about what makes sense for the most people. Now please stop to stress your opinion like it would matter more than anyone’s else opinion.

It’s about what makes sense for the most people.

It’s better not to have auto updates. It’s good to know what’s getting updated and why.

People talk about security updates, without exactly explaining what they might be. What might be the problem with security on such a little app like the Gnome Calculator, for example?

Of course it’s a good point, for a lot of users that do not care about this forum or Ubuntu’s dev in general – e.g. my wife !

– to have auto updates.

Why no toggle? Because we want to ensure people are up to date, that there’s no machines out there running outdated and insecure software. Sure, we could put a big fat switch in there which turns off updates, and that would please you and a few other users.

I haven’t followed the full discussion. But if what I quoted is true, please, no. I am using Ubuntu because auto update broke Windows 10 on this machine. Please do make auto update off by default. No matter core OS or software installed.

I want them, but let me choose. A list as we have now, tick or untick them individually before going for install.

It’s better not to have auto updates. It’s good to know what’s getting updated and why.

… in your opinion. The vast majority of people do not believe this.

People talk about security updates, without exactly explaining what they might be. What might be the problem with security on such a little app like the Gnome Calculator, for example?

You’re conflating things. GNOME Calculator was put on the ISO as a snap to help us test the whole “seeding snaps” process, not because it was a fast-moving, CVE-prone applications. Chromium, Firefox and LibreOffice fall more into that category. They are updated often, and sometimes have security issues which need delivering to users quickly.

As previously mentioned, by default snapd detects when users are on slow or metered connections. if it doesn’t, you can force snapd to think it is, by setting this (bottom) tickbox in Network Manager. 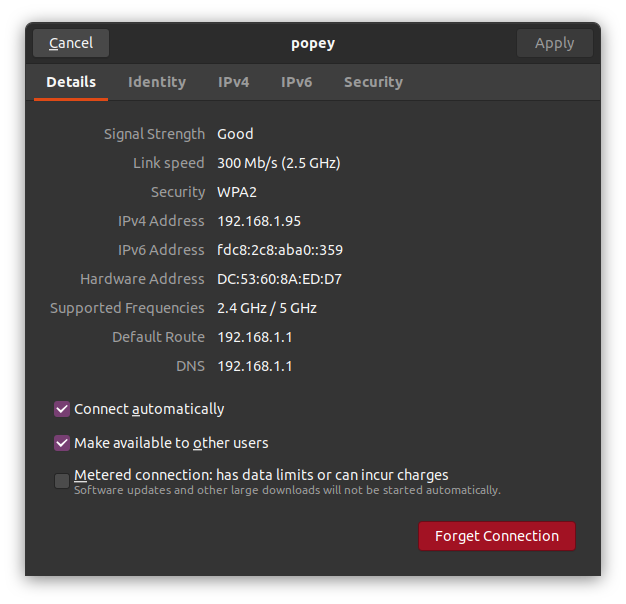 For some users, yes, and again, not all users think like this. It really is beneficial to get your brain outside your own head and consider how other people think sometimes. Most “Normal” users do not care what was updated, what version number something is, which libraries are used. They just want the latest version of the software, which works. If something breaks, they expect the developer to fix it and a new update to come along. They’re not remotely interested in these details because the computer is a black box which they use to do a job. Version numbers are meaningless to them, and only people like us care about them.

There are way more of them than there are of us.

It is possible for a developer to publish two versions of a snap in the store. See for example the Skype snap. It has both a stable and an ‘insiders’ build available. Users can switch between them. Many other snaps do the same thing. Firefox could do the same with ESR.

You can certainly imagine all kinds of things. Indeed it is possible to defer updates to later, if you want, for example this will defer until tomorrow.

Currently we don’t have a GUI to present that in a friendly way, but that could be made, I think.