I also wanted to know what's wrong with Gedit VS Ubuntu theme issue which yet not been solved?!

Saw this post in Reddit. I am also curious whether if the simple issue gets fixed by 22.04 release. It’s funny and annoying at the same time. This can be very disturbing for noob users. I thought Ubuntu is famous for being a noob-friendly distro. When I upgrade my distro to 20.04, this is what I get as a surprise. And sadly it exists still there. WOW. 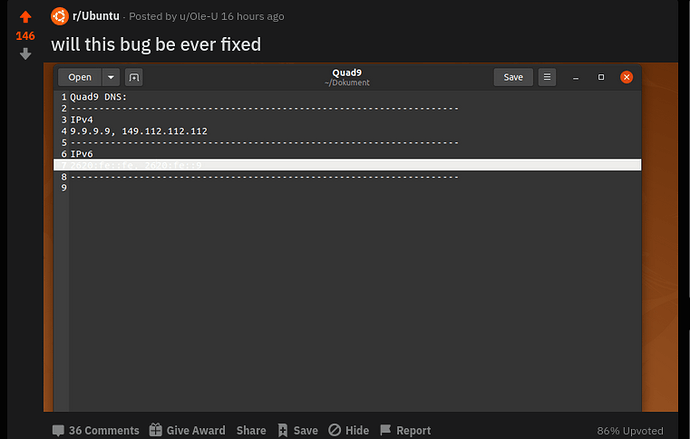 Well, bug or not it’s been reported as such:

A recent comment by a GNOME maintainer in the upstream report suggests a fix won’t appear in Ubuntu or in any other distribution any time soon:

These style schemes in question aren’t designed to be interchangeable across any theme. Applications need to choose them wisely based on the current theme and or dark preference.

We might introduce something better in 5.x, but that’s a long way out and will probably come with the additional cost of fixed (rgb, no alpha) backgrounds.

Not sure who ‘people’ are in this context but as pointed out in the previous comment it has been reported as a bug on launchpad and upstream and not marked as invalid on either of those, it is considered as a bug.

Now it does impact users who select a non default variant of the theme and while it would be nice to fix the workaround is easy, change also the theme variant in the editor…

I’m actually quite happy if this is the biggest issue that comes to mind when you’re using Ubuntu.

I get a bit confused reading those bug reports.

Then isn’t this a bug in Gedit itself? Because it doesn’t choose the correct stylesheet when a dark theme is selected? It seems like that bug is simply saying “fixing this at the gtksourceview level will take a long time, the application is currently in control and does the wrong thing here”.

Is this correct or am I missing something?

I went with the oblivion theme, which looks pretty good and fits the theme nicely. 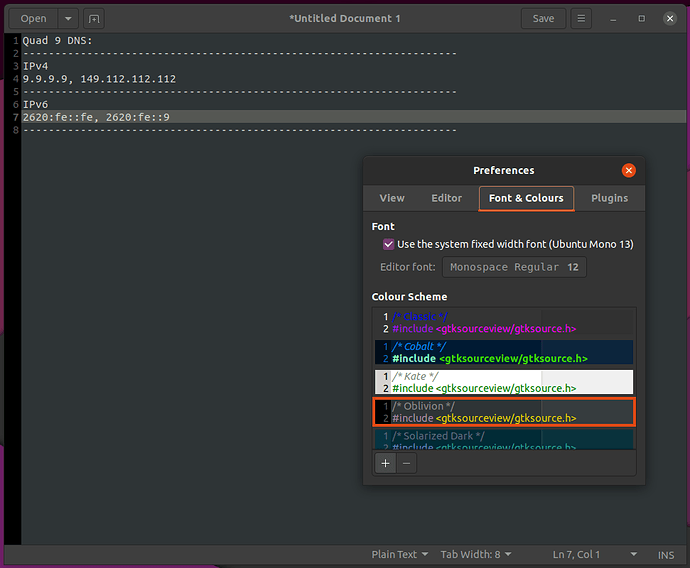 I’m actually quite happy if this is the biggest issue that comes to mind when you’re using Ubuntu.

Nope. Definitely not “bigger issue”.
There are lot of other issue which are bigger than this:

Oh please, how does not using Wayland by default have any effect on you? If you like Wayland, then logout, click the cog, choose Ubuntu with Wayland and log back in. One tip: when stuff doesn’t work on Ubuntu with Wayland; try it first on regular Ubuntu because 80% chance it’s a Wayland issue. I frequently use Wayland to test stuff out and I always find bugs. Those bugs are the reason Ubuntu doesn’t use Wayland. I try to fix as much as I can for my own apps, but some stuff simply does not work on Wayland, no matter how hard you try.

Ubuntu actually used Wayland by default years ago, and it didn’t work well so they decided Wayland wasn’t ready. In the meantime, Canonical is working on two Wayland compositors, one of them almost completely built by Canonical. Additionally Ubuntu makes it super easy to try Wayland out.

But you said it; “Reddit”. A site that feeds on negativity. When Ubuntu was using Unity, reddit gave Unity tons of criticism. Now that Ubuntu is on Gnome, reddit gives Gnome tons of criticism. You can be sure that once Ubuntu switches to Wayland, reddit will suddenly hate Wayland. Not because the public mindset actually changed. Simply because reddit encourages unconstructive criticism. The people who like something simply go to other places and/or shut up.

And the blatant lie that Ubuntu somehow enforces snap. If Ubuntu was enforcing snap, it would be doing a really bad job at it, because I have at least a dozen applications I installed myself which are not snaps. I had to jump through zero hoops in order to install those. The fine Yaru developers even publish the Ubuntu Yaru theme on Flathub so that when an Ubuntu user installs a Flatpak, the app is themed correctly. - Flatpak, which is in the regular Ubuntu repositories, by the way, packaged by Ubuntu developers.

Pausing this thread for 24 hours. It started as rock-throwing…and has not improved.

EDIT: Since the OP considers the question to be answered (they checked that box), leaving closed.