How to manage Multipass on Linux

Set the driver to libvirt

If you want more control over your VMs after they are launched, you can use the experimental libvirt driver:

Switch to the libvirt driver

Make sure you have libvirt installed, as Multipass is using the libvirt daemon running on your host:

Allow Multipass to use your local libvirt:

You can then switch the driver

All your existing instances will be migrated and can be used straight away.

NOTE: You can still use the multipass client and the tray icon, and any changes you make to the configuration of the instance in libvirt will be persistent. They may not be represented in Multipass commands such as multipass info, though.

After launching an instance, you can see it show up in virsh (see man virsh for a command reference):

You can also use the graphical virt-manager interface: 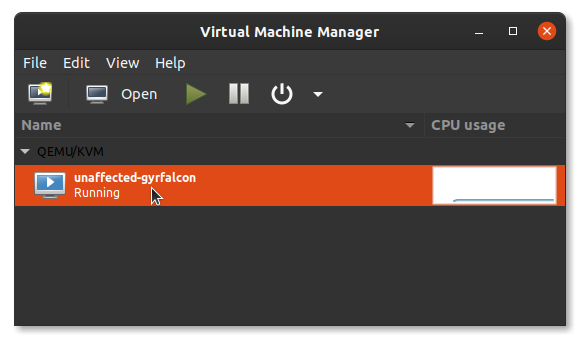 To switch back to the default, use the qemu driver:

Here, too, existing instances will be migrated.

NOTE: this will make you lose any customizations you made to the instance in libvirt.

You can systemctl edit snap.multipass.multipassd.service and place content along these lines (replace <hostname> with the hostname or the IP you want it to listen on) in:

Restart the service then:

In Ubuntu (or any other Debian-based distribution), the package samba-common contains a SMB server. We can install it with the command

Then, editing the file /etc/samba/smb.conf lets us add shares, adding entries like the following:

If using the LXD backend on Linux, we can benefit from a performant file system mount, at the expense of not being able to mount it while the instance is running. A folder is mounted on an instance with the command

where lxdinstance is the name of the instance, mount_lxd is an arbitrary device name for the mount, source specifies the path to share and path specifies the directory where the source is to be mounted. With only this command, LXD takes care of everything: no need to run commands on the instance.

virtio-fs is also available in qemu and libvirt backends, though at an extra setup cost.

In Ubuntu (or any other Debian-based distribution), the package nfs-kernel-server contains the files to use the NFS server included in the kernel. We can install it with the command

To share a folder, we use the following command:

where the * means “export to any host”; we can specify a host name or IP address there.

Get stand-alone windows with X11

Linux and MacOS run X by default, so no extra effort is needed. We have the possibility here to be a bit more secure than we did on Windows, by using authentication in X forwarding. However, we will forward through ssh in order to avoid struggling with xauth stuff. Unfortunately, multipass shell does not let us to pass extra parameters to ssh, so we cannot use the shell through Multipass. We will allow our user in the host to log in to the Multipass instance through ssh, by copying our public key, in file ~/.ssh/id_rsa.pub to the list of authorized keys of the instance, in file ~/.ssh/authorized_keys. We can do this with the following command (replace the example instance name with yours):

Then, check the IP address of the instance, using multipass info rocking-squirrel. Finally, we can log in to the instance using X forwarding doing

(replace xx.xx.xx.xx with the IP address obtained above).

We are done, and we can test forwarding using xlogo as we did in the Windows section.

We’re using systemd-journald on Linux, integrating with the de-facto standard for this on modern Linux systems.

To access the daemon (and its child processes’) logs:

Thanks for all the great manuals here.