OpenStack is a collection of open source projects designed to work together to form the basis of a cloud. OpenStack can be used for both private and public clouds.

MicroStack provides a single or multi-node OpenStack deployment which can run directly on your workstation. Although made for developers to prototype and test, it is also suitable for edge, IoT, and appliances. MicroStack is an OpenStack in a snap which means that all OpenStack services and supporting libraries are packaged together in a single package which can be easily installed, upgraded or removed. MicroStack includes all key OpenStack components: Keystone, Nova, Neutron, Glance, and Cinder.

In this tutorial you will learn how to:

MicroStack has been tested on a physical machine running either Ubuntu 18.04 LTS or Ubuntu 20.04 LTS.

Install MicroStack from the beta channel:

If you are using an older Ubuntu version or some other Linux distribution, you may have to install snapd first. Refer to snapd documentation for more information on installing snapd on your computer.

When the installation process has finished you should see the following message on the terminal:

Note that at the time of writing this tutorial, the installed version of OpenStack was Ussuri.

Being a snap, MicroStack is published in channels which are made up of a track (or a major version), and an expected level of stability. You can run snap info microstack command to see which versions are currently available.

MicroStack needs to be initialised, so that networks and databases get configured. To do this, run:

Once this completes (15 - 20 minutes) your OpenStack cloud will be up and running!

The password for the admin user can be obtained in this way:

Type the credentials and press the “Sign In” button: 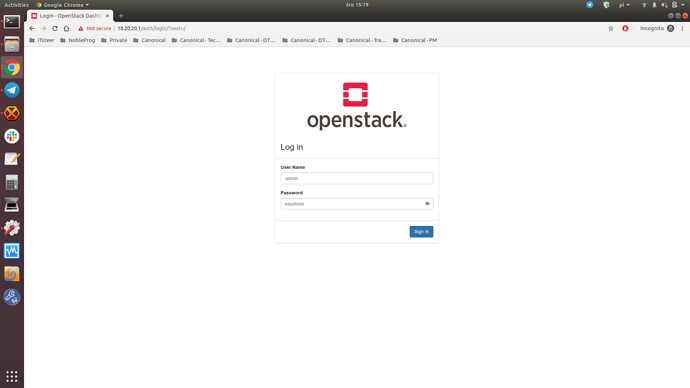 If everything goes fine you should see the landing page: 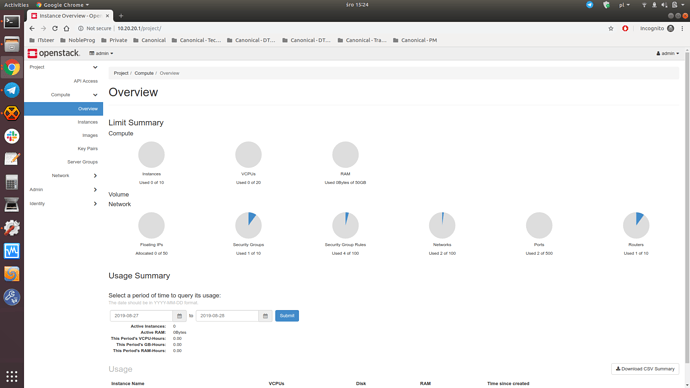 You can also interact with your OpenStack cloud via the CLI by using the microstack.openstack command. The syntax is identical to the client delivered by the python-openstackclient package.

You can run microstack.openstack --help to get a list of available subcommands and their required syntax.

To launch your first OpenStack instance (VM) called “test” based on the CirrOS image, run the following:

The resulting output provides the information you need to SSH to the instance:

Note that the IP address of the instance may be different in your environment. In order to connect to the instance run the command from the output:

Now that you are connected to the instance you can use normal Linux commands. Note that the CirrOS image provides a minimalist operating system! For example:

To disconnect from the instance, type exit (or Ctrl-d). 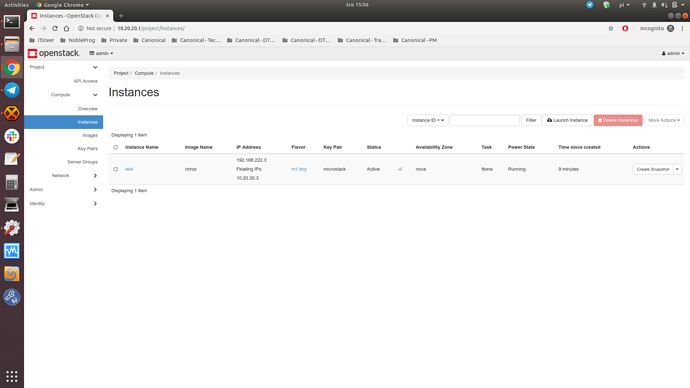 The microstack.openstack command provides the same functionality as the upstream OpenStack client. This means you can use the same commands as on any other OpenStack installation.

MicroStack comes preconfigured with networking, an image, flavors, opened security groups (TCP port 22 and ICMP), and an SSH keypair. Use the above client command to view these things as you normally would. The launch command can even be replaced by the client command (microstack.openstack server create). You will need to handle floating IP addresses manually though.

Learn more by reading the MicroStack documentation. The clustering feature is particularly interesting.

Congratulations! You have made it!

You may wish to temporarily disable your MicroStack installation when not in use. To do so, run:

To re-enable it, run:

Where to go from here?

Many of the other simple OpenStack deployers (Packstack, Devstack, …) don’t permit rebooting the cloud without additional manual work. It would be great if you added a statement whether a Microstack can be rebooted, and what the conditions are if any.

I assume that means it expose webui at 80 port ? But it’s not working.

From output of microstack.openstack catalog list, I can see the endpoints services.
but no horizon/dashboard: https://pastebin.ubuntu.com/p/QBrzQ57nkg/

It seems my above guessing about webui IP is wrong.

When I launch a vm, it prints:

There are 2 useful information there:

tried, not working either.

But it’s not working either:

Hi. I was able to get this going by using tasksel to install a GUI on the server, then connecting with a browser. I think its the same sort of thing K8S has, where it does its own networking, but if you need to connect incoming you have to set up a proxy. Translate a system address:port to that internal one.
I haven’t tried it.
After getting the gui up, I tried installing and running cirros, as shown in the tutorial.
It did not start and i saw no logging or reason why.
So I’ve dumped it and gone on to something else.
–John

@hisdad thanks for trying Microstack and welcome to the community! Would you mind sharing the exact command that failed for you and the output you got? 10.20.20.1 is the IP address of the br-ex interface that’s created automatically during MicroStack initialisation. br-ex is a bridge that is used to connect physical ports, so that floating IP traffic for project networks can be received from the physical network infrastructure (and the Internet), and routed to self-service project network ports.

@guoqiao thanks for trying MicroStack and welcome to the community! Would you mind sharing the output of ip addr command from the machine you’re running MicroStack on? Horizon doesn’t register in the service catalog, so you won’t be able to find it under the microstack.openstack catalog list output. Also see my response ^^ about the br-ex interface.

Someone fix this problem?

@leojimenezcr could you please share the output of the ip addr command through the Ubuntu pastebin? Do you have any existing interface that uses the IP address from the 10.0.0.0/8 subnet?

Hey, I am not able to access the dashboard. (I followed the installation tutorial). The url address ( http://10.20.20.1) displays in broweser the following: “404 not found nginx”

Here are pastebin of ip addr command of my system https://pastebin.ubuntu.com/p/zzFKwM5G4Z/

Will be helpful if someone can point me towards potential solution.