Deploy a Redis cluster on Ubuntu Server at any scale 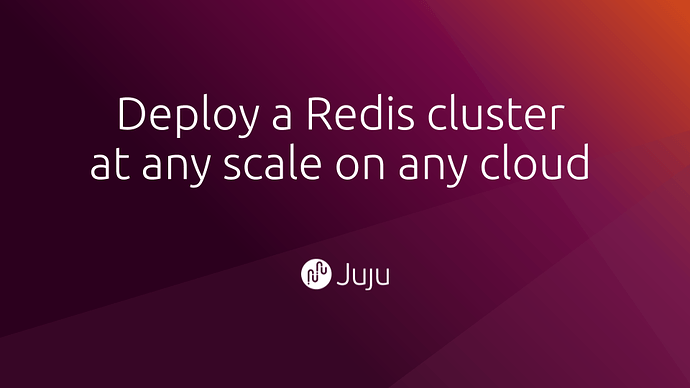 This tutorial walks you through the process of deploying a Redis cluster on Ubuntu Server. The instructions work on all clouds supported by Juju—even bare metal servers—but this tutorial includes specific instructions to deploy the cluster to AWS, Google Compute Platform or Azure.

You will be able to configure the exact scale that you require and deploy it into any region supported by each cloud.

ⓘ Looking for a fully hosted solution? Use Juju as a Service (JAAS)
JAAS is a hosted service provided by Canonical, the company behind Ubuntu. It’s a “Juju controller” for free. The Juju controller talks to the cloud provider programmatically to provision machines and manage software deployments. Once they’re online, the controller then installs the software that we care about: Redis. To use JAAS for this tutorial, create an account on jaas.ai and run ‘juju login jaas’ in a terminal.

How this tutorial is structured

The top of each step provides a command to be executed in the terminal window. Explanatory text then follows for people who want to know more.

To open a terminal window in Ubuntu, open the Terminal app or holding Ctrl + Alt + T together.

A “model” is Juju a term to describe a logical service made up applications. A model might represent a whole web app, including its web server, databases and work queues.

For our purposes, our Redis cluster will make up the entire model. We’ll use the name redis-cluster-tutorial.

To create the model on AWS, use the following command:

Where can I deploy my model?

The command at the top of this page uses the “US West 1” region from the AWS cloud provider by specifying aws/us-west-1.

To get a list of cloud providers and supported regions, just omit that argument from the command:

Running juju add-model command will probably launch a browser window asking you to log in.

Juju (and JAAS) need to be granted permission to act on your behalf. Juju works by talking to the cloud provider programmatically. This login process confirms that you’re willing to delegate authority to Juju to do so.

To install Redis, we’ll use the juju deploy command. juju deploy works with the model that we’ve just defined to install software there.

Enter this command in the command line:

That command can be a little confusing if you haven’t encountered Juju before. Here is an explanation of each part of the command that you used:

ⓘ Check that the clustering configuration option is enabled
It’s important to include the option --config cluster-enabled. Without it, three independent Redis instances will be deployed.

ⓘ Use whatever scale you want
If you would like to use a 5 node cluster, for example, change the --num-units option to 5. The --contraints option can also be tweaked.

What is a charm?

A charm is software that deploys other software and makes it easy to maintain. The cs:~omnivector/redis charm has its own website.

Omnivector is a member of the Juju Experts program. Their team has written the Redis charm that we’re deploying and released it as open source software.

Wait for Redis to be deployed

The juju status command provides a live view of what is happening behind the scenes.

Will eventually produce an output similar to this:

Once all of the workloads are in the “active” state, it’s time to move on.

To require that Redis clients specify a password when they execute commands, use the juju config command. The command supports setting multiple options at the same time by adding additional setting=value pairs.

Use the same command with different arguments to increase the TCP Keep Alive connection settings.

Expose the Redis cluster to the Internet

Our Redis cluster is now ready. To make it accessible to the Internet, enter this command in the terminal:

The juju expose command talks to the cloud’s firewall systems to make them publicly accessible.

To test that everything is functional, we’ll use the Redis command line tools:

We’ll use apt to install the Redis CLI client

Find the public address of one of the nodes

To know where to ping, we’ll make use of the output from juju status again.

This command will spend a moment or two probing the model, then report something similar to this:

With the Redis CLI installed and a host to connect to, let’s send the PING command:

With some luck, it will produce this encouraging response:

Redis is installed and active in the cloud.

We recommend creating an account at the Juju Discourse forum. That’s the best place to ask any questions.