I am suggesting making a Ubuntu Flavor of the Cinnamon Desktop Environment, here is why.

I was thinking for a name-according to DistroWatch, there is no such name as Cubuntu.

But, doesn’t Cubuntu for a name seem weird? Coo-boontu. I was also thinking of “Cinnabuntu”.

So, I want to make one and gather a team to help do that. Anyone in favor let me know, and also, Cubuntu or Cinnabuntu? If none of those work we will just say Ubuntu Cinnamon.

(also someone would have to make a plymouth theme)

This is not a new idea :). There have been discussions in the past about Cinnamon remixes of Ubuntu, but nobody appears to have stepped up to do the work to make it happen. It would indeed be awesome to see a well maintained, up to date and beautiful cinnamon based remix of Ubuntu, I hope you can find some people to coalesce around the idea.

Note: I’m mentioning “remixes” rather than “flavours” because there’s a lot of work to do in order to become an official flavour of Ubuntu. You don’t get there without a lot of work. It’s best to start off as an “Ubuntu Cinnamon Remix” initially. But the name is the last thing to worry about

In my mind the first step is to ensure the packages for cinnamon and whatever else is required are up to date in the Ubuntu archive. The best way to do that is make sure they’re well maintained in Debian first. It looks like in Debian and recent Ubuntu releases we have those packages, so that’s a great start.

I’d suggest a good next step is to take the lead and start learning how to build a custom ISO image, and get building. See what you can make yourself. Having something to build upon will make it more compelling for others to get involved.

Next is exactly what you’ve done, find people who are willing to work on the project. I’d recommend spreading this thread far and wide to find more people who might have the skills and time to get involved.

I was thinking for a name-according to DistroWatch, there is no such name as Cubuntu.

But, doesn’t Cubuntu for a name seem weird? Coo-boontu. I was also thinking of “Cinnabuntu”.

Cubuntu was once there. One of the best things that came from Cinnamon is the fork of Nautilus called Nemo. And, maybe the inclusion of Synaptic by default. This Nemo takes over the desktop and places icons on it, keep all the options intact while/when the newer Nautilus won’t. One such try with Nemo 4.06 as the default file manager on Ubuntu is here, still with the default Gnome-shell – having the best of both worlds, btw.

You can find how to build a custom iso from your installed system here. You can also find another how-to here at Mint forums.

The easiest way to get the newest Cinnamon packages is from here, that is, if you’d want to build a Cinnamon Remix. You’d have be careful not to upgrade while installing any package from that repo, for Linux Mint would take over your installation. Maybe better to download the deb packages and the dependencies from there and install them manually. The only problem is, while Linux Mint produces the latest Ubuntu based Cinnamon “Remix,” all other remixes would be bit behind.

I can’t seem to tell how long Cubuntu LTS releases are. Is Cubuntu still being supported?

If you are looking to create a remix & and eventual flavour then you really need to work within the packages in the repository.

If you want the packages in the repository upgraded then get involved with Debian and the Cinnamon team and look to work with the team to uplift the version there.

As Popey mentioned - really the first port of call should be to create an ISO from all the current repository packages. Where packages are genuinely not in the repos then supplement the ISO with a PPA. Look to get those extra packages into Debian/Ubuntu at some point.

I can’t seem to tell how long Cubuntu LTS releases are. Is Cubuntu still being supported?

Whatever Cinnamon packages in Ubuntu repos or in Embrosyn’s ppa are old, so the Cinnamon Desktop you get from them would look old. Right now, Linux Mint has Cinnamon 4.0 and the changes are so much, I decided to install Mint 19.1 and move the repos to Disco. Also, moved Synaptic to stock Ubuntu version. Pretty neat and lovely, carefully crafted distro, made to be user friendly in every way. 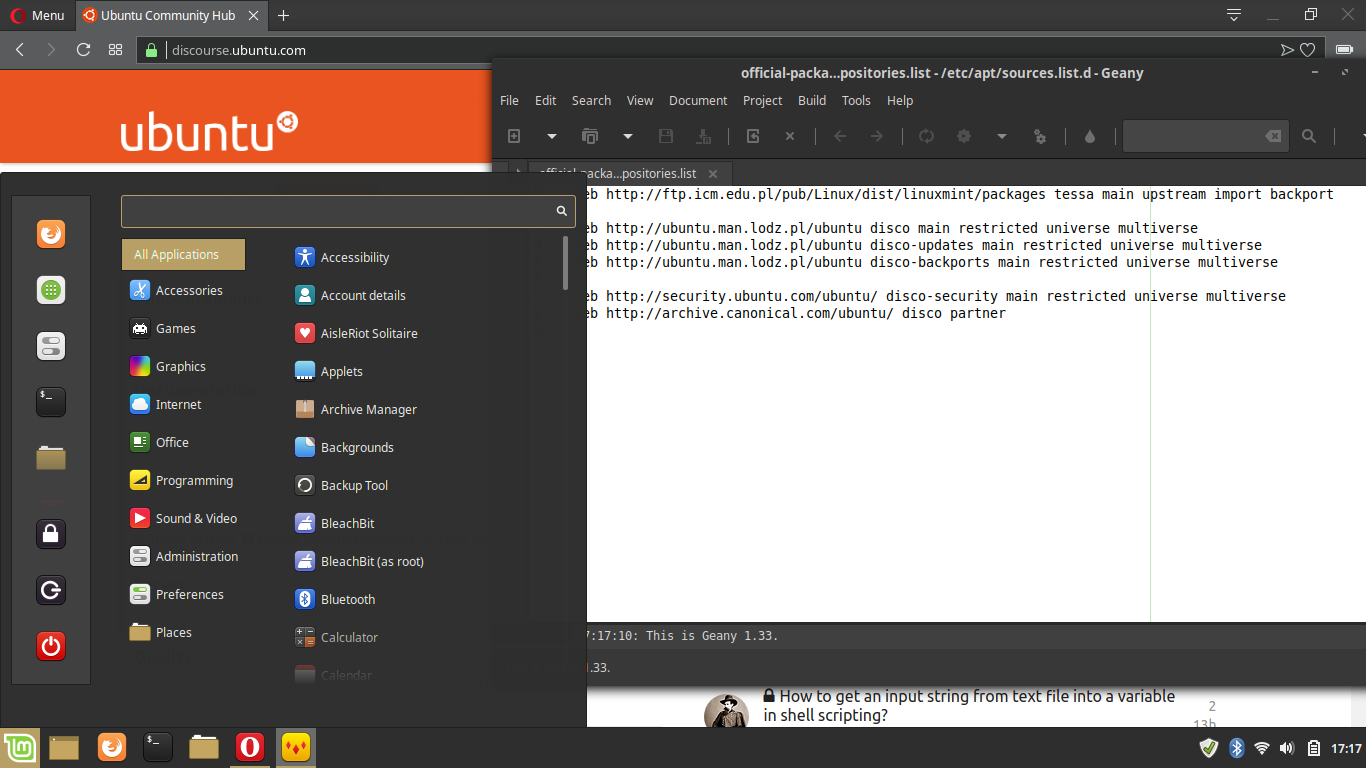 Now, this Cinnamon Desktop is on Disco, it is somewhat changed from Mint 19.1, even though it still says so. The lsb-release can be changed (it doesn’t trouble me though), and the Linux mint repo will be unticked, so any changes there won’t kill the Disco. Any updates/upgrades would come only from Ubuntu repos.

The answer shall be settled.

The name of Cubuntu, and reusing it seems like stealing-plus it sounds weird. So thereful, I think Cinnabuntu should be used, because it’s different from the other names (remixes, Ubuntu Budgie for example or Xubuntu could be Ubuntu XFCE), but Ubuntu Cinnamon seems good too.

I think it’s great an Ubuntu with Cinnamon, I had already wondered why there is no ubuntu flavor with one of the most popular desktop environments. Other popular distros like Fedora, Debian, Manjaro, etc, have a flavor with that DE. I also thought of the name Cinnabuntu.

In Portuguese “Cu” is ass, so Cubuntu it would be a name a little strange for speakers of Portuguese language.

I also liked to see an Ubuntu flavor with Deepin DE.

But, if for some reason, you installed it, deepin will treat itself like installed the “xubuntu-desktop” package instead of the “xfce4” package-it will try taking over. It will install its display manager/login window. You can easily prevent this by when it asks, to stay as gdm.

Everything works smooth, until you switch out of the Deepin DE.

When I tried it on a VirtualMachine (since I did it once on a real machine to try again and get around the issues), for some reason it also changed my default file manager from nautilus to its deepin-file-manager.

Also, in the startup log by hitting Esc on bootup, it will try to play it’s startup sound on startup and shutdown on shutdown. It won’t succeed however.

So techincally, you could get around those two issues, but of what its trying to do, then I recommend not installing it for now. If you do, then you would downgrade to 18.04 if you haven’t, install, then reupgrade. (And dont forget to change the config.) Since changing the config requires sudo, you are putting your full system at risk of it being taken over.

If we did to a Ubuntu Deepin remix, at this point we would need to look at Manjaro’s Deepin Remix. But they use different package managers, so it would end up probably being a team effort with the Deepin team itself.

But yes, the Deepin Desktop looks beautiful. I would love to use it. I feel you.

EDIT: After writing this, I looked at the repository, and there was a drive link for Ubuntu Bionic, and it showed a Ubuntu Bionic Deepin spin ISO. Just saying, but I wouldn’t really recommend it.

Actually, there’s Cinnamon with Ubuntu - Linux Mint. They create Cinnamon, and the base is Ubuntu, 18.04 LTS. You can move it to Disco and make it Disco Cinnamon,

As for Deepin, the packages in the PPA are somewhat old, but if you want to install them to 19.04, then change the repo to bionic in the leaeasy ppa /etc/apt/sources.list.d and update. If you want to add the newest deepin packages, add deb http://packages.deepin.com/deepin panda main contrib non-free to your sources.list and update, and add the gpg key. Don’t upgrade, but install necessary/needed dde/deepin packages from that. You may have to download and install some packages from Debian Sid repos.

I was thinking whether to try this, but as Ubuntu is a tweaked mix of Debian Testing and Unstable (Buster and Sid), it seems it is much safer to use Deepin distro from its original creators, for they really work on it, and release only tested copies. I have Deepin for a long time - it was then based on Ubuntu. Then they moved it to Debian Sid, and I can understand the reason behind that – Deepin’s new base, Debian Sid is more predictable than Ubuntu. And, once Deepin create a DE, they stay with it and continue to make it better.

Last year I was looking for Cinnamon without Mint; but liked the base created by Ubuntu Budgie, so I installed Cinnamon on top. It’s not the newest version, as the repo only had 3.8, but its close enough until someone opts to turn it into a flavor. I was calling it Cinnabuntu, so it’s great to see others had the same thought.

I even created an icon for it.

The colors are from the Cinnamon logo and the swirl uses the Ubuntu logo for the play-on-words of cinnamon bun.

Nice logo. Actually, Cinnamon without Mint is like a shoe without the sole.

By the way, Ubuntu Budgie is quite a good base to install other DEs.

Lol! I love the icon. I might add one more improvement-the mountain used in the Cinnamon logo, but I love it a lot. Thanks