Can we add multilingual support to Ask Ubuntu?

So everyone has a place to ask for help not only english speakers. This gives the posibility to build a larger and stronger community since increases the number of potential users of your product.

I did some research and I found the following. Stack Exchange is not for corporations:

Stack Exchange does not offer a private label service for owning a Q&A site. You are free to create an expert Q&A site in your area of expertise. There is a lot of visibility and credibility to becoming a central figure in an expert community, but Stack Exchange is a product for the Internet community at large, not for corporations or individuals.

How AskUbuntu was created then? Take a look at this announcements:

…Ubuntu forums is a mess, and StackEngine is an extremely effective and well-designed platform for creating a knowledge base. The forums have served us well but forum threads quickly become unwieldy and they do not age well. – David Siegel Jun 20 '10 at 17:40

I believe that Ubuntu Forums has already proven that a site specifically tailored to answering questions for a single distribution is a sustainable and worthwhile endeavor. There are roughly 1.3 million threads and sixty thousand active users on that website. However, I personally feel that Stack Exchange would be a better medium than Ubuntu Forums for some users and situations, and that even if I or we ultimately end up being wrong, it’s still worth giving a try and seeing where it goes. – Evan Jun 21 '10 at 8:27

So they give it a chance and it stayed there for almost 10 years.
It is also important to notice the only Stack Exchange in spanish is Stack Overflow (in Spanish).
So it’s possible but it’s not as common as I thought.
To make this right I should talk with the LoCo council first to try to promote the page before his creation and gather enough signs for the proposal. Then talk with those pioneers and ask them how did they manage to create a Stack Exchange in a language other than english.

how did they manage to create a … in a language other than english.

Simple matter. Give space. Let those, who speak in a different language to post in their language, even if the only English speaking guys can’t read them. Invite and encourage foreign language speakers to come in. One of them would become a moderator in the given language in time. If that won’t work, it means there’s not enough community (of users) out there. 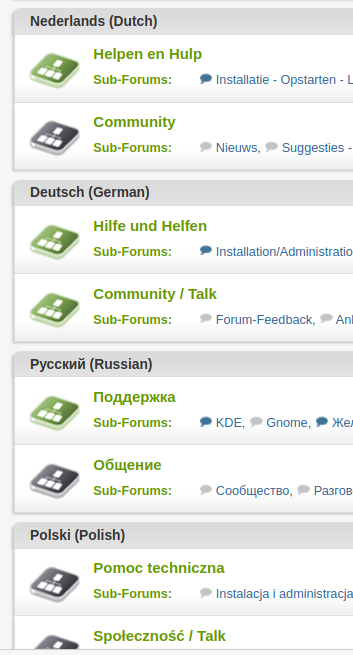 If we use software like Discourse, we can use community moderation like down votes without actually having a moderator. Allowing to flag threads make possible for global moderators to interfere and take help from translation tools which are pretty good at what they do these days.

The technical side of doing things is very simple. I don’t think setting up a forum is the hard part here. But to attract or point users to it.

Is it a way to implement this in AskUbuntu? Because I don’t see any subforums. If everyone start posting in his own language it will be harder to find a question to reply, don’t you think?

I like the Discourse format too. Let’s say I have the users. I know a few telegram groups and I can invite them.

If everyone start posting in his own language it will be harder to find a question to reply, don’t you think?

There are people in the world, who’d never speak a word of English, but are quite involved in technology. Most times they speak in short form (somewhat slang), which cannot be translated by online translator apps. So, if there are subforums, sub discourses, people would come in. They’d feel belonged. By maintaining English as the only language, we are uppity and push those, who can’t/won’t speak English away.

I sometimes find more answers reading in other languages.