I use dual booting fairly extensively and I’ve always been disappointed by the way grub looks. Could Ubuntu install a better default theme perhaps?

I’m sure we could do better. For example, here’s the " Stylish grub theme" from vinceliuice/grub2-themes: 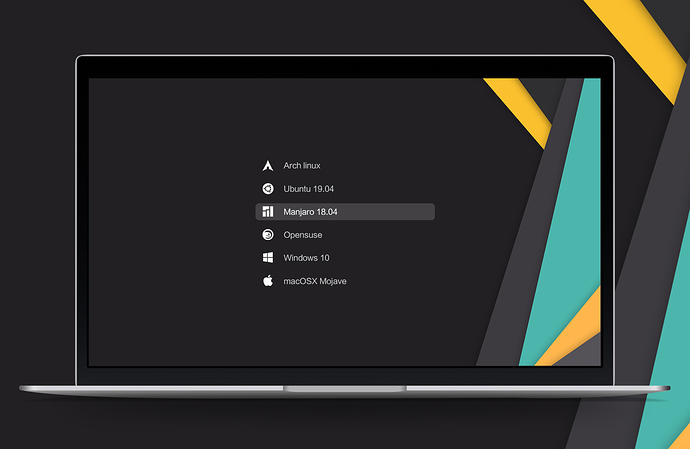 Wonderful idea @timClicks! That would be a much needed update indeed. But the thing is that this would need SO much testing and it is 100% sure that it would never land for testing during an LTS cycle. Issues like this needs to be sorted

Anyway, I would love to help with this project and (if ready) purpose it for 20.10. There might be a technical reason for not using a graphical GRUB menu (like no good fallback mechanism), but the Canonical guys will know.

Oof! I didn’t realise that there would be stability problems

Also worth noting, not everyone even sees the grub menu very often. Many users either leave their computers on, or suspend/resume, or have a default non-dual-boot install, which hides the grub menu by default.

…not everyone even sees the grub menu very often. Many users either leave their computers on, or suspend/resume…

But you’re right, this would be eye candy for the dualbooting users.

I wasn’t talking just of myself. We have data which shows a significant proportion of users do not dual boot. They will not see grub at all. It makes sense for us to use data where we have it to drive our decisions. If the development work is risky, and only benefits a tiny minority, it doesn’t make a ton of sense in an LTS.

If the development work is risky, and only benefits a tiny minority, it doesn’t make a ton of sense in an LTS.

Absolutely. Would dual booting be considered a “tiny minority” of Desktop users though?

I believe it’s not the majority.

No, probably not. I doubt it’s a small number though, but that’s purely speculation driven from my own bias!

I’ve been using Ubuntu since 2006 and I’ve never removed the Windows installation from any of my systems. So, for me, the grub menu is much more prominent than the Ubuntu splash page.

Consider almost every OEM install system likely ships with exactly one OS installed. So that’s all the Dell, Entroware, System76, Tuxedo and many more. Then look at the data for clean installs. “Install alongside” is less than 10%, and that’s only a proportion of total users, given the pre-installs mentioned above. 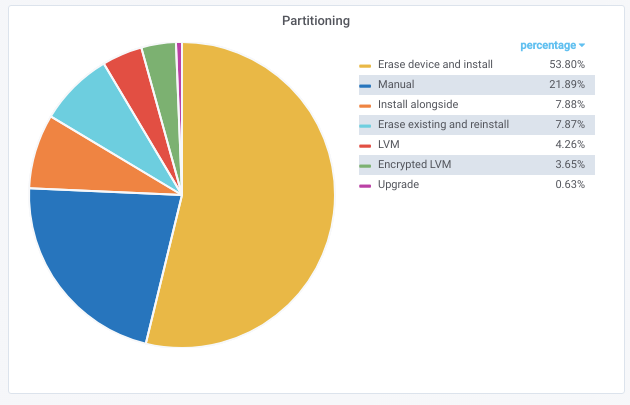 I’m not saying this is conclusive proof, but it’s data we have which points in a direction.

That’s really useful! Much more informative than my speculation.

We see the numbers, but 7,8% is still many thousands of users.

If the development work is risky, and only benefits a tiny minority, it doesn’t make a ton of sense in an LTS.

Just to be clear we’re NOT talking about putting anything in an LTS - if so, the target is 22.04 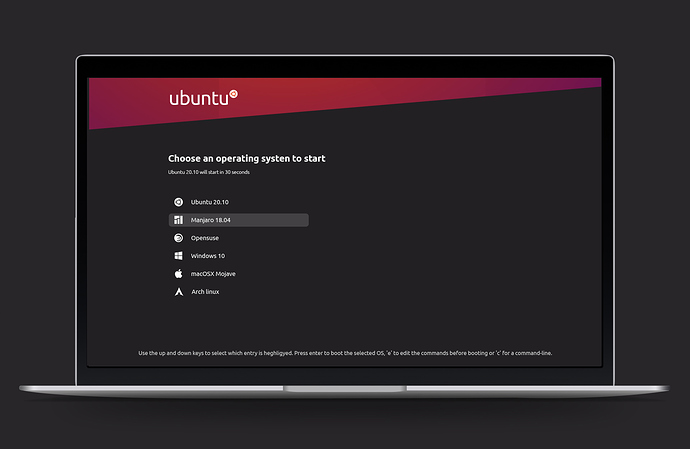 I remember reading about some methods about adding a background to Grub somewhere. Is there one ?

@popey while this graphs is useful to get some hints, we should take it with a pinch of salt.

This is not really saying that only 7.88% are using Ubuntu alongside something else, but that this is the choice they made in the installer. E.g. I could pick manual and do my multiple OS partitioning, or install another OS afterwards.

I have 3 desktop systems with dual or triple boots and as I have OS:s on different SSDs I always use “Erase device and install”, as this is the most convenient way to install.

@fcole90 My point was not “this is solid data” merely pointing out it’s not the majority. Yes, take it with a pinch of salt, yes, it doesn’t represent all users. But please don’t say that just because you could deviate from defaults, that millions of others did, that’s just as misleading.

I totally agree on your majority stance, my point was that the multi-OS minority was likely greater than what the plot suggested, thus possibly suggesting that having a better grub could be an enhancement for many people, even if just a minority

I’m looking at the Manual slice in particular, which is an option that people with multiple OS might choose to have better control, rather than using install alongside (not meaning that all or most of those are as such, but it’s very likely IMHO that a good part is multi OS)

A GRUB theme would be nice, but as @popey suggested, probably not something a lot of people care too much about.

On the other hand, having a proper GRUB theme for EFI boots (like the BIOS ones already have) on the installation media would be really nice, since that’s something everyone with EFI sees when they boot the ISO.

And while we’re at it, what about language selection like the BIOS (syslinux) bootloader has?

Given EFI’s ever-increasing predominance, I see this as something of high importance.

I seem to remember talking to someone (@adconrad?) about why this was the way it was, but I don’t remember the reasoning.