I am just starting a discussion concerning gnome-software-center vs unity-sofware-session for the current unity-session available in the universe. I personally think that we should leave gnome-software as default for the 18.04 development cycle . There will be more new stuff to try out - so thats a pretty good reason

But I would like to hear your thoughts about it.

I don’t like Software Shops, for you cannot see what dependencies are going to be installed. I prefer Synaptic and the console.

This is a really good point. Actually , at first, while in testing 17.10, it was sort of bewildering as to why depends could not be seen. I don’t think there is a “simple reasoning’” but perhaps there may be a reasoning that it can be fixed so that we can see the depends?

I think this is a logical route to go if there is going to be some sort of touch_up development sprint in mid Janurary. It may not even happen until next dev cycle of 18.10. but it’s fun to discuss it as part of a roadmap for unity

Or what’s being removed dependency wise - It’s bit me before! Too bad the developers upstream don’t give Synaptic some love.

I don’t like Software Shops, for you cannot see what dependencies are going to be installed. I prefer Synaptic and the console.

That’s ok. I do similar. I’ll use synaptic, apt, aptitude, dpkg, git - whatever get’s me through the night - in fact I’ve probably got more xfce git than not.

You, however, need to put yourself in someone else’s shoe. What you’re looking at is someone who’s coming from Windows in all likelihood, they would have absolutely no idea what you’re talking about. They would not care. They want to install ‘foo’

Blinding people new to the scene with arcane nonsense from the 1990’s doesn’t help.

That’s why Ubuntu did as well as it did - it was easy.

The ‘shops’ do that for them.

If they actually need things they don’t show - they are in the same category as you and I and the comparison is void.

Honestly… it’s not the “Windows” argument again , although I know exactly where you are coming from. From my outlook, from my perspective, this is about assistive technologies that can further enhance the ubuntu-unity DE. So soon I hope to write up a roadmap for unity in another thread and itemize out specifically that if there be any development or facelift for ubuntu-unity DE it will be added features that lead to easier access and continued RSI reduction considerations. There may be no razzle or dazzle but I have an optimistic view that it could be tailored to look pretty smart and if Gnome-Software is going to make this , in part, come to fruition, then it should be inlcuded and at this stage of the game I am in totally agreement with jbicha at a suggestion he made back in another fourm back a few weeks ago. So those are my 2 cents worth eh

Someone in the other thread suggested if we can use the welcome and boutique from Ubuntu mate (Re skinned of course). 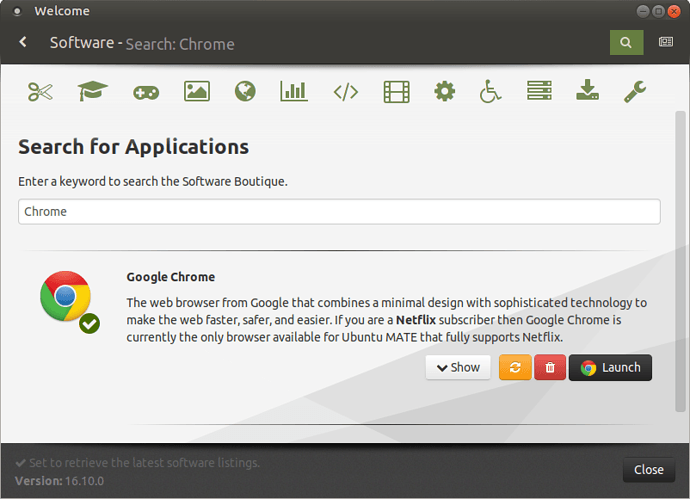 Thank you for this. It is exactly why we are having this discussion. It is just amazing , the options that are available. I use Ubuntu MATE for all my music composition. It would be good if the boutique were reskinned - so to speak- for a unity theme, otherwise it is totally a MATE theme and would clash with unity.

Could you give me a list of why you think gnome-software -center would not work with ubuntu-unity when you have time?

One voice for Mate-software. If Unity will go with Mate apps this is the most logical decision. It will be easier for Unity to co-exist with Mate rather than the default Gnome.

Jeremy’s proposal regarding Ubuntu software and Gnome-software (if we stay with gnome-software):

Test Case ========= Install Ubuntu 17.10. sudo apt install unity Restart your computer. On the login screen, click your name then click the gear button and select Unity. Log in. In the Launcher on the left side of the screen, GNOME Software is shown...

Could you give me a list of why you think gnome-software -center would not work with ubuntu-unity when you have time?

I have nothing against gnome-software, but if we nitpick:

If we really must have a Software shop, why not Mate’s Software Boutique? But, make Gdebi as the software installer, also as in Mate.

While it’s valuable to discuss the various tweaks that could be made to a Unity spin of Ubuntu, remember why this exists in the first place. People like Unity, the way it came in 16.04 (and 14.04, and 12.04). The choices made when those things were delivered, led to Ubuntu being the most used distro on the planet.

Keeping Unity alive after the upheaval earlier in the year seems to be a core part of the team mission. People who currently use Unity might be looking for where to go next, which option to pick when 18.04 rolls around. It would thus be prudent (in my mind) to keep things in 18.04 as similar as is technically possible to what existed in 16.04. That way people moving up from 16.04 have a familiar place to go.

Ripping out the default apps they love / use and replacing them because you don’t like them on your system isn’t the right way to think about this, in my mind. Try to put your feet in their shoes for a bit. There’s a good reason we didn’t ship user-hostile applications like Synaptic by default. Lets remember that.

There’s a good reason we didn’t ship user-hostile applications like Synaptic by default. Lets remember that.

Why do you call Synaptic a user-hostile app?

Because it’s an expert level tool, not something “normal” people find easy to use. It’s full of technical jargon and an over complicated user interface. Why do you think no other platform has a tool that looks or acts like synaptic as a default application for adding new apps?

Why do you think no other platform has a tool that looks or acts like synaptic as a default application for adding new apps?

PCLinuxOs has even though it uses rpm, Mint has, practically all Debian based distros have it.

Actually, lately everyone is bring in the word “normal” people, in a discussion. Anyone, who actually installs Debian, for example, is then not a “normal” person, as he/she has to configure his/her installation. In the same way, anyone, who installs his/her Ubuntu through the mini.iso or the server edition are not “normal” people.

I said “no other platform” (not distro) implying Windows, OSX, Android, iOS etc. The ones that collectively have billions of users.

My point stands, Ubuntu didn’t ship synaptic for good reason. Going back on that without the history of those decisions and their rationale is foolhardy in my opinion.

Because it’s an expert level tool, not something “normal” people find easy to use. It’s full of technical jargon and an over complicated user interface. Why do you think no other platform has a tool that looks or acts like synaptic as a default application for adding new apps?

I agree. Unity should not be designed for a testers market. Synaptic is a testers/devs tool. Clients I have helped with migration shudder at any thought of programs like “synaptic” or “terminal”. They would rather suffer proprietary systems and the malware that comes with it rather than spend a brain dump on the terminal.

The basic theme I would like to propose is that Unity be the front-runner with assistive technologies. Perhaps a minor face lift to make it look smarter and more tailored would be enough to justify a version change if that be the case. We want to move forwards, not backwards.