Thank you so much for this remix! I have been using it as my daily driver on 4 different machines. It has replaced Mint 19 cinnamon. I couldn’t be happier! It’s fast and with nemo as the file manager, this is everything I could have wanted. I give it the edge over cinnamon because the fonts are so crisp and clear. For whatever reason, font rendering in Mint 19 cinnamon was blurry. Definitely not the case, here! Also, this Ubuntu 20 remix is blazing fast on my core 2 duo machines. One of them is a first generation core 2 duo Levono T60 which tops out at 3 GB RAM but with zswap enabled, preload and prelink installed, ananicy nice manager, and using the great discarded and sloth extensions in Chrome, it performs much better than many much newer laptops with Windows 10. Youtube videos are smooth as silk… especially in Firefox… same with Netflix and Amazon Prime.

Kudos and keep up the excellent work!

@coaxguy99 Thank you very much for this awesome feedback!

Glad to know that it works well for you.

You’re welcome, @rs2009! I did have one problem. For some reason, my log files on a couple of machines got very large over the first few days of use and the systems would no longer boot. After manually deleting the file by booting from a thumb drive, I fixed the problem using the busybox method described at the following link:

I also limited the largest size the journal files could ever get by editing the /etc/systemd/journald.conf file such that SystemMaxUse=50M

You may consider making these defaults to improve the user experience. It would also be a nice touch to add My-Weather-Indicator by default. The autostart tick box within the app doesn’t work but adding the binary to the unity startup does work. I got it from here:

Haven’t seen any activity for the past several days. Please keep this flavor alive! It is amazing.

Ubuntu Unity 20.04.1 Focal Fossa is now available and can be downloaded from:

Ubuntu Unity 20.04.1 Focal Fossa can also now be downloaded from:

Please log any new issues/bugs that you find during testing at https://gitlab.com/ubuntu-unity/ubuntu-unity-issues/-/issues/.

I have installed a newer version of this Remix [20.04.1] on a VM and I have noticed some changes since the last version.
First, I noticed the installer welcome message was revamped, which I think is cool. 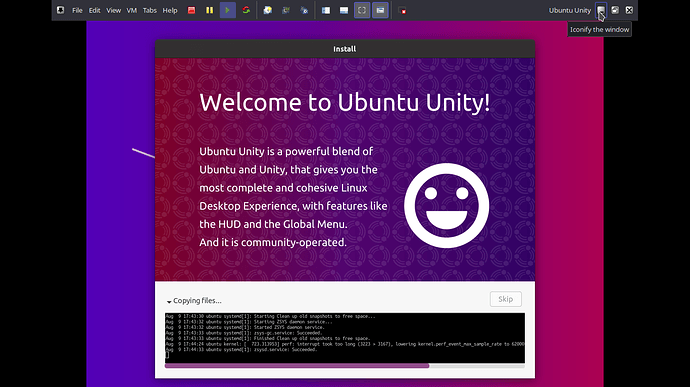 message.png1366×768 349 KB
And also, the default lock screen image has changed too, and in which I think is cool too! 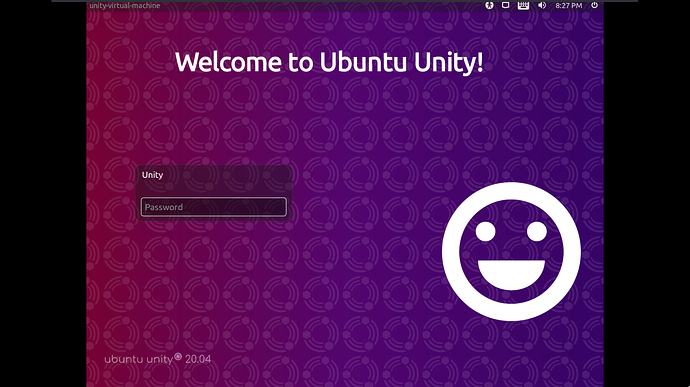 wow.jpg1366×768 281 KB
Then, I also noticed the ISO image is smaller. The previous release was 3 GB, now 2 GB.
Later, I realized some GNOME apps were removed, probably for people who confuse the two duplicate, and different apps, or probably for people who wanted to save space.
As you can see, GNOME Files are gone, only the Unity one is there 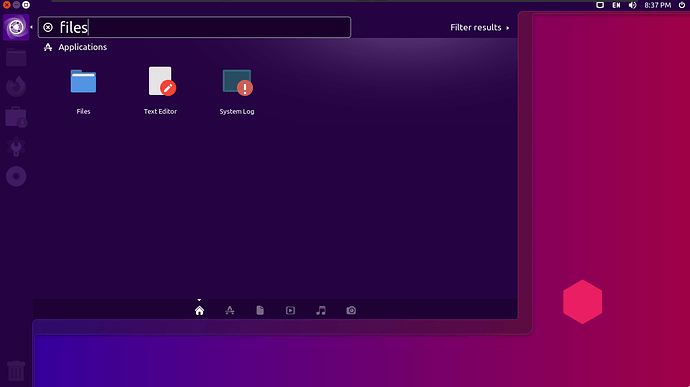 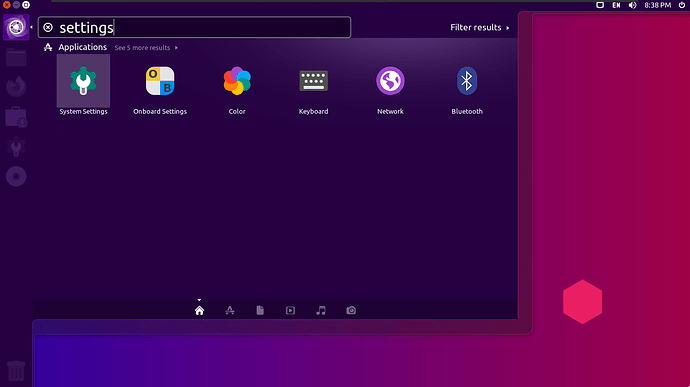 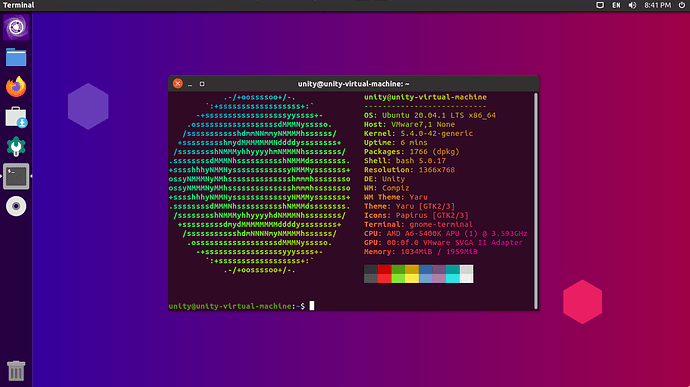 Hello there, thank you for your work.
What are the differences between this distro and the default one with manually installing unity ?
I’m also using Unity but just downloaded the default come with GNome and replace it with unity by myself.

As you may have noted, our website was down for maintenance yesterday and earlier today. A user had reported malware ads when he tried to access it using the Ubuntu Unity link on google.de/google.com. I noticed the same issue as well when I used the google.de link. It looks like the website malware was detecting whether it had been loaded from Googlebot. The issue didn’t occur if we accessed ubuntuunity.org directly. After investigation, I’ve removed the malware, tightened security and the website is back up. There was a rogue PHP file which was showing the advertisements, which is now removed. I’ll blog about it soon.

Please note that foss.ubuntuunity.org was not affected. Also, the ISOs were not affected (they are hosted elsewhere).

Hi everyone, we recently noticed a few issues with the Ubuntu Unity 20.04.1 ISO and have now replaced it with a new ISO. Please use the latest ISO which is available from the same sources. Release notes have been updated at: https://ubuntuunity.org/2020/08/06/ubuntu-unity-20-04-1-released/

Let me know if you need help with this sort of thing. Ideally you need to rebuild your servers from scratch once they’ve been compromised as you have no way of knowing what other exploits have been installed in there once it’s been open.

Tried to make minimal install of the latest iso in the VirtualBox. Made four attempts. All four to no avail. The installation exits during unpacking libreoffice-help-zh-cn.
Cannot figure out any possible steps.

@asilin99 Can you please download again and try reinstalling, because nobody has reported this issue so far?

I’ll try to and will definitely report later. Thank you.

OK, I finally succeeded with the installation. Made it on a different distro tho. Debian stable, namely. That’s probably because of an older version of VirtualBox.
It was interesting to notice that many packages were installed and later purged in the process of minimal installation. Why install them in the first place?

OK, I finally succeeded with the installation. Made it on a different distro tho. Debian stable, namely. That’s probably because of an older version of VirtualBox.

It was interesting to notice that many packages were installed and later purged in the process of minimal installation. Why install them in the first place?

This is an issue with Ubiquity, the installer we use.

I have the workspace switcher enabled in a 2x2 grid but the keyboard will only move to the left or right workspace and not vertically up or down.

Also, I would request everyone to please use Telegram, Discord, Ubuntu Unity Forums or IRC for technical support. Ubuntu Discourse is not meant for technical help/support. Thank you!

Thanks for the swift response, have taken note of where to go in future.

Not sure why people like wall but best way is to set up properly in ccsm as in screen, this way ctrl+alt+all arrow keys work logically 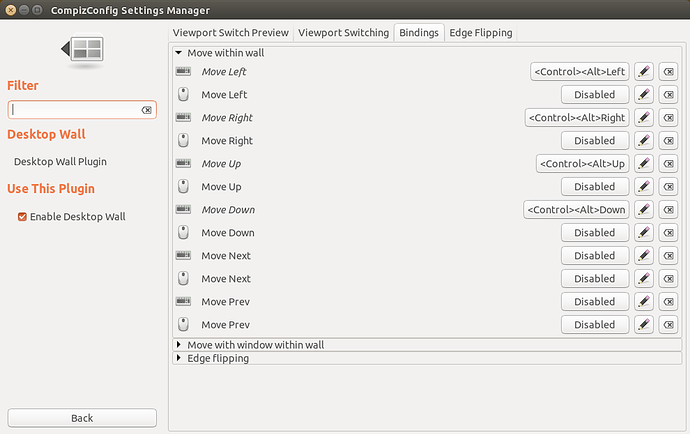