A small update to the egmde snap

You would have to be following Mir development very closely to have noticed that we’ve changed the default to not supporting clients using the mirclient API. That’s because it isn’t very useful any more. Only the 16.04 version of Mesa carries the necessary patches and it doesn’t work at all with EGLStream or other platforms we are considering.

As a result I’ve been looking at various places we assume the existence of this support and updating code and scripts to continue working.

The egmde snap has been useless on 16.04

If you’ve ever installed the egmde snap on 16.04 you’ll have quickly realized that the Wayland support from GTK3 and Qt5 based applications doesn’t work well with it. You might get something on screen, but nothing usable.

The egmde snap is not quite useless on 16.04 now

As a result of this, it is now possible to use the mirclient support on 16.04.

If you now install and run the egmde snap you’ll find that you can start many applications: 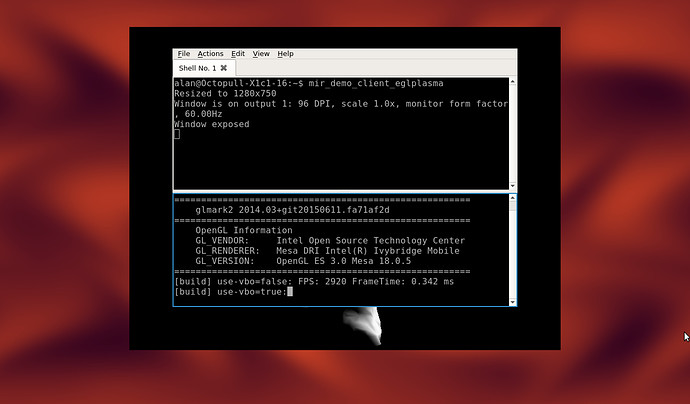 One unfortunate application that doesn’t work is the gnome-terminal when started with no arguments. I’ve succeeded in running this from qterminal with the following command but not investigated further:

Using mirclient is not as good as using Wayland

With the egmde snap on Fedora, Arch, or Ubuntu 18.04 (or later) Wayland applications are usable and basic stuff like moving and resizing work. Using the mirclient support, moving and resizing doesn’t work (which is why glmark2 is mostly hidden in the picture above).

Three years is a lot of history

Using mirclient is not as good as using Wayland except on 16.04! The only reason to consider using mirclient on 16.04 is that the Wayland support from 16.04 toolkits is also problematic.

Over the weekend it occurred to me that toolkit support for mirclient actually improved between 16.04 and 17.04 and I forgot to mention that in the OP. The Unity8 desktop was close to being usable in 17.04, so I imagine the move & size problems mentioned were addressed.

If anyone is sufficiently nostalgic to investigate, the improved toolkit support was probably backported to 16.04 by UBports.