Packaging and Deploying Ubuntu Frame Snaps on the Desktop

Packaging your application as a Snap for IoT graphics

For use with Ubuntu Core, your application needs to be packaged as a snap. This will also allow you to leverage Over The Air updates, automatic rollbacks, delta updates, update semantic channels, and more. If you don’t use Ubuntu Core, but instead another form of Linux, we recommend you use snaps to get many of these advantages.

There’s a lot of information about packaging snaps online, and the purpose here is not to teach about the snapcraft packaging tool or the Snap Store. We will, instead, focus on the things that are special to IoT graphics.

Much of what you find online about packaging GUI applications as a snap refers to packaging for desktop. Some of that doesn’t apply to IoT as Ubuntu Core and Ubuntu Server do not include everything a desktop installation does and the snaps need to run as daemons (background services) instead of being launched in a user session. In particular, you should ignore various Snapcraft extensions that help writing snap recipes that integrate with the desktop environment (e.g. using the correct theme).

Writing snap recipes without these extensions is not difficult as we’ll illustrate for each of the example programs used in the previous section.

First, you will clone a repository containing a generic Snapcraft recipe for IoT graphics.

In the same terminal window you opened at the start of the last section, type:

If you look in snap/snapcraft.yaml, you’ll see a generic “snapcraft recipe” for an IoT graphics snap. This is where you will insert instructions for packaging your application. This is how the .yaml file looks like: 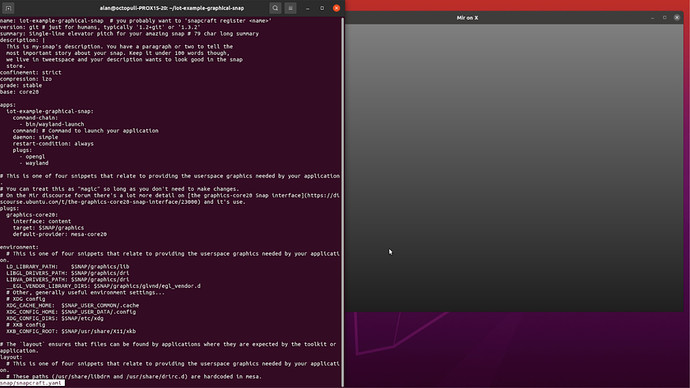 The customised snapcraft recipe for each example described in this guide (i.e. GTK, Qt and SDL2) is on a corresponding branch in this repository:

Once you have the customised snapcraft recipe you can snap your example applications.

To learn how to package Ubuntu Frame applications for embedded devices, follow this how-to.