Nautilus share allows users to share nautilus folders over samba, which is (was?) pretty much the standard way to share files for windows users. While the feature is useful it seems to not have been working correctly for some cycles in Ubuntu.

I actually have no idea if this is really a Nautilus issue but didn't know where else to file it. I have a fresh install of ubuntu 17.10. I start nautilus (using File). I right-click on a folder and select "Local Network Share". When I select...

To allow users to connect through username/password nautilus-share needs to create samba users, or the samba component (libpam-smbpass) allowing to do that was buggy and has been removed (https://lists.ubuntu.com/archives/ubuntu-devel-discuss/2016-March/016298.html), letting the nautilus integration mostly non fonctional. Now the samba bug has been fixed it seems, but the corresponding component is apparently unmaintained and Debian stopped integrating it for this reason.

It means our options are:

I don’t know if local file sharing is still a thing nowadays or if people just send things over the internet/facebook/emails/apps/etc. Accessing shared folders is still standard and going to supported (useful to access your nas, corporate ressources, etc), creating shares of your own datas over smb … does anybody have a clue how useful that is still to users in the modern world?

If the feature still looks quite useful I would recommend trying to make it work again, if we think it’s not so important nowadays then it’s probably easier to remove the option.

What do you think?

Personally, I don’t think I’ve ever created an SMB file share from my PC in order to share a file with someone on the LAN. Accessing SMB shares on a server, yes, a fair bit (because things like Smart TVs rarely support NFS), but creating a share from my laptop, never.

As you say people tend to email small files, or use something like Telegram or Wormhole to transfer bigger files (anyone want to work on a frontend for Wormhole?!

So if we can still access server based SMB shares, I’d be happy with that. I’d be interested to hear what others are doing though.

Serendipity. I set up a SMB file-share yesterday to receive files from a network scanner.

However, that was the first time in many years I have used SMB. The scanner manufacturer chose SMB as their only networking option.

I use network sharing between desktops/laptops on occasion, particularly to take work home with me. Due to the nature of my digital work, the files are big, and using a LAN without the intermediary of a USB key is nice. In fact, I did last year use my laptop as a jumpdrive for several large files to move between a Mac laptop and Windows laptop (owned by two different people who couldn’t figure out how to move something >4Gibs).

Since migrating to 17.10 last november sometime I hadn’t made a share with nautilus, so for the sake of trying I just did so using the GUI prompt. Worked, with a single error that apparently “libpam-smbpass” couldn’t be found (just as in the launchpad bug). Logged out and then in again (as per the suggestion from the error), reshared the folder and everything works fine. Perhaps the error message (“Please restart your session”) could be more explicit about logging out and in again, as the question “What’s a session?” could be the first thing that comes to mind of a typical user, and the need to share the folder again by the user could be a source of frustration since it’s not explicitly suggested.

remove nautilus-share and the samba sharing integration from the desktop

I don’t think this is a common enough use case. I’m not sure how helpful sharing via Samba is to Android/iPhone devices (which more people have today then Windows machines). Gnome-user-share/WebDav might be better for this long term, which is universe in case people want to try it (I couldn’t get it working quickly).

This is how it works now. I like this option.

At home I use it for NAS and KODI entertainment centre. It seems to me use of NAS is more common in consumer homes judging by the amount of consumer facing NAS units available.

For example families with children often have a home lan with a file server for the entertainment centre. Kodi provides access via samba. So some data points to consider.

nautilus-share is very useful feature for small-office-home-office (SOHO) and home users. For example, sshfs is not cross-platform alternative and is not alternative at all. Samba is standard file-share service for heterogeneous networks.

So nautilus-share should be fixed.
Nautilus loses functionality too fast. Without shares it will convert to glossy dumb program faster.

I’ve used it in the past, for example on LAN parties…

I would go for only allowing guest shares…

I have even tried to access those shared folders from Android using VLC, LocalCast and ES File Explorer apps ( Kodi as well ). It didn’t go well with Android as well ( with username/password ).

If you can make it work, my vote is for keep ( if there are not other grave issues ).

If it is kept, it should be moved where it belongs: in Settings > Sharing 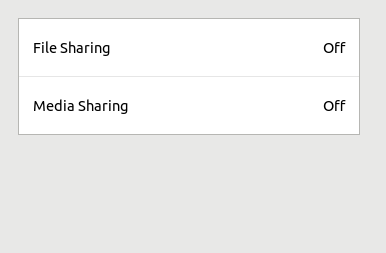 To keep things consistent, a non default file sharing should not be available only in the Nautilus context menu (right click > Local network share).
It confuses new users.
I think SMB should only be available from Settings.

I don’t think there should be a Nautilus Share menu for SMB.

To summarize what I said In the topic about File and Media Sharing:
WebDAV is already integrated in Settings > Sharing.

Having 2 different sharing protocols enabled from 2 different places and with the same name (Sharing) is confusing.

If Samba is not installed , it should be removed from Nautilus folder properties and from the right click menu.
So it should show up only after samba is installed.
Eventually, it could be integrated in Sharing and removed entirely from Nautilus.

I don’t think we should enable insecure WebDAV file sharing instead of Samba.

AFAIK, WebDAV file sharing is in clear text, which is unacceptable in 2018. While most people now share files using some sort of cloud service, if we do allow sharing local folders, we should continue doing so using Samba.

Some form of working resource sharing should be provided ‘out of the gate/box’ with any modern desktop operating system. Providing a message box that says “Sharing services are not installed” just does not cut it. I further agree that these options should not appear in either Caja or Nautilus unless sharing a sharing protocol is installed and working.

Getting SAMBA to actually work in Linux is a bloody nightmare. It REALLY needs to be fixed.

Darn right samba should be able to work out of the box. When I click to share a folder I expect it to be shared and I want to see it on my network and if my network is mostly PCs it should show up else the machine that won’t do that stands a chance of being replaced with a PC. There are lots of devices that just assume SMB is available. If you can’t play with the big boys you will end up on your own at the nerd table.

Most people just want to get something done, not poke about with config files and what not. If Ubuntu doesn’t do it in a couple of clicks then Ubunut will get replaced with something that does.
And because it’s not a really common use case it’s even more important for it to be simple and obvious to the user. No-one with any sense is going to spend a lot of time trying to figure out something they will only do once - and not being able to do what other platforms do - even if it’s stupid - means switching platforms.

Any of the supported sharing should be selectable and, if necessary, installable at a single click. I can chose to use WebDAV on this laptop if I want, but I can’t chose to use it on the network scanner that wants to write to a share on my machine!!

Reminder from the Moderators:

“Hey, this should work” is not really up for debate. Seems like everyone agrees with that already.

Folks who have realistic suggestions to offer to make it work better/easier/faster/, please be specific. This is the place for those.

Remember, you can edit your own posts to clarify.

You might remember that there is an installed base of Ubuntu users that already use SAMBA and have it working. This includes SOHO and businesses. It really hasn’t been a nightmare. And Ubuntu should be able to be upgraded and then not become a nightmare because something that might be daunting to a new user will become a nightmare to someone who depends on it and finds it missing. That’s microsoft’s way. Force users to use their way or no way.

Negative: Not everyone agrees. It only works after you fiddle with it and most people would rather not have go through the fiddling.