Currently the 19.10 daily amd64 image ships with no foreign architectures. This makes installing 32-bit software such as Steam (and others) difficult for new users. The 19.04 amd64 release images had i386 foreign architecture enabled by default, so this seems to be a regression since the last release.

I appreciate there have been many long discussions about the (possible) future(s) of i386 packages and support. However, as I understand it, right now 19.10 ships with i386 packages in the archive, and will do on release day. So for an amd64 install, I would expect there to be an i386 foreign architecture configured.

I’d expect i386 in the output, but get nothing.

I appreciate the workaround is to use dpkg --add-architecture i386 but that’s impenetrable tech nonsense for normals who just want to install the latest Ubuntu, get Steam and start gaming. It will also exacerbate the (still held) opinion among our users and detractors that we are “killing gaming on Linux” by making i386 software installations difficult.

Our most recent statement on the matter says It has always been our intention to maintain users’ ability to run 32-bit applications on 64-bit Ubuntu – our kernels specifically support that.

Will this be fixed before 19.10 is released? 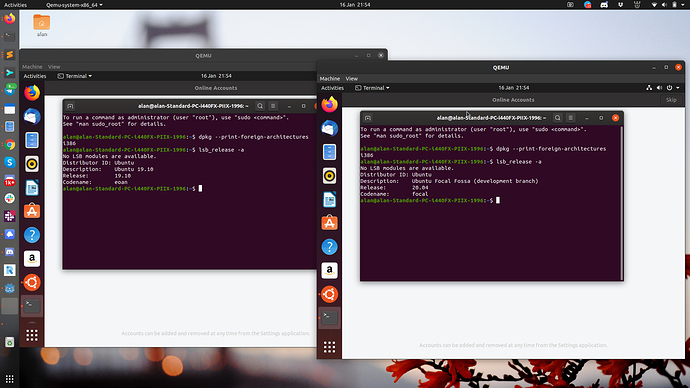