So you’re saying you got an update for gtk-common-themes, and the theming for Firefox regressed? Or did it regress when you upgraded to 22.04 ?

I got an update for gtk-common-themes and that when the regression happened. Even the Snap Store (Ubuntu Software) looks bad. 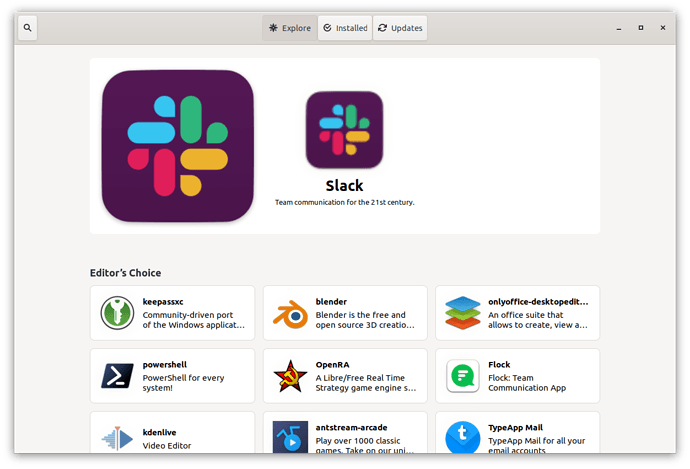 I haven’t touched anything regarding that. I will make sure I am not on the beta/candidate channel. This system is the family PC w/o any tinkering.
Edit: I am on the stable channel 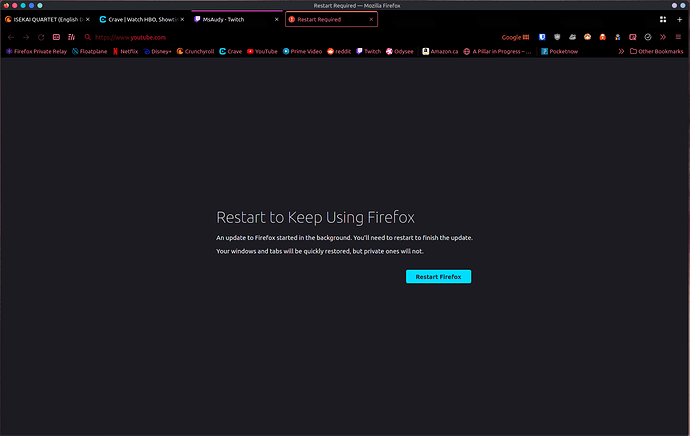 Should I do a new post on Snapcraft Forum regarding this? As this also extends of Chromium. I am assuming any GTK3 application.

@oSoMoN The stable channel of gtk-common-themes has been consistently out of date, at least since the last release.

I had forgot I did this, but I’ve been using the candidate or beta channel (they’ve had the same version) since Impish came out. I did this because that was when the mixed Yaru theme went away and Yaru-light was renamed Yaru, so without the updated gtk-common-themes, Chromium didn’t find the right theme when I set my system to 'Yaru'.

Since stable gtk-common-themes is still from Sep 2021, I don’t think it could include any of the new Yaru color themes from Jammy unless I don’t understand something. I’m surprised no one else noticed this actually! I only missed it because I was already on the beta channel.

That’s amazing, I change gtk to the candidate channel and now the color themes match.

Also where is firefox 100. I thought the point of snaps were faster updates from mozilla.

On the Ubuntu discourse, a posted noted theming issues with the new Firefox snap As I replied there, this reminded me that I’ve noticed that the stable channel of gtk-common-themes has been consistently out of date, at least since around the 21.10...

Also where is firefox 100. I thought the point of snaps were faster updates from mozilla.

In the candidate channel, the Mozilla release team will decide when to promote it to stable.

Another thing I just noticed.

The spellchecker only works in English. I installed the firefox add-on for my language (Spanish), but it doesn’t appear as a language option in the spellcheck. I never had this problem on the .deb.

Is this a known limitation?

How did you install it? If you right click on a textentry -> lang -> add dictionnary and you install the one for the language you want it should be listed

That’s how I did it and the new language doesn’t appear on the menu.

Reporting back … Jammy should be using the stable/ubuntu-22.04 channel, which is up-to-date. So if you’re like me and ever switched channels, run

Good to know. Although for the record I ran the upgrade and didn’t get put on that specific channel.

@elcste, thank you for pointing this out!
I didn’t notice that, but indeed gtk-common-themes turns to be on latest/stable/ubuntu-19.04 channel after upgrade to 22.04.

it seems we need to figure out how to handle channel transitions on upgrade indeed, could someone report it on https://bugs.launchpad.net/ubuntu/+source/ubuntu-release-upgrader/+filebug ?

could someone report it

Snaps need a way to have their channels transitioned on release upgrade, which doesn't seem to happen right now. A recent example is the gtk-common-themes snap. The stable channel version is not the latest because it can break earlier releases, so...

Hi! I was doing some tests since I noticed from the update to Firefox 100 the snap started to take longer to start, its look from my laptop that with each update, there is a hit in startup times both cold start and subsequent starts.

My laptop is a Thinkpad t14s with AMD Reinor and a SSD nvme.

When I was on Ubuntu Impish a run some manual test using my phone chronometer (I know is not the best way to test this, but using --trace-exec add a lot of overhead and the time reading wasn’t like in real life lots of amd gpu errors)

In impish I got:

When I did a fresh and clean install of Ubuntu Jammy I did the same test with my phone because a did notice a improvement in the startup time of Firefox.

In jammy a got:

But with the recent updated to Firefox 100 I noticed a regression with this times, I know that the very first time you run Firefox after an updated its need to copy some config files that take time. But I’m talking after this first import start (that took like 20sec) I did the same test with my phone:

In jammy after Firefox 100 update i got:

So it did get noticeably worse

then I did a snap remove firefox --purge and did a fresh install of Firefox 100 and I got back the better startups times.

Maybe this will help attract awareness on way so many users report inconsistent startups times, I hope this help in improve this important snap.

Thanks for all the work, love this snap <3

In a persistent live system of 22.04 LTS Ubuntu Desktop or Ubuntu community flavour, Firefox works during the first boot, but not after reboot or shutdown+cold boot.

There is a workaround in mkusb, but I think the problem should be solved in Ubuntu.